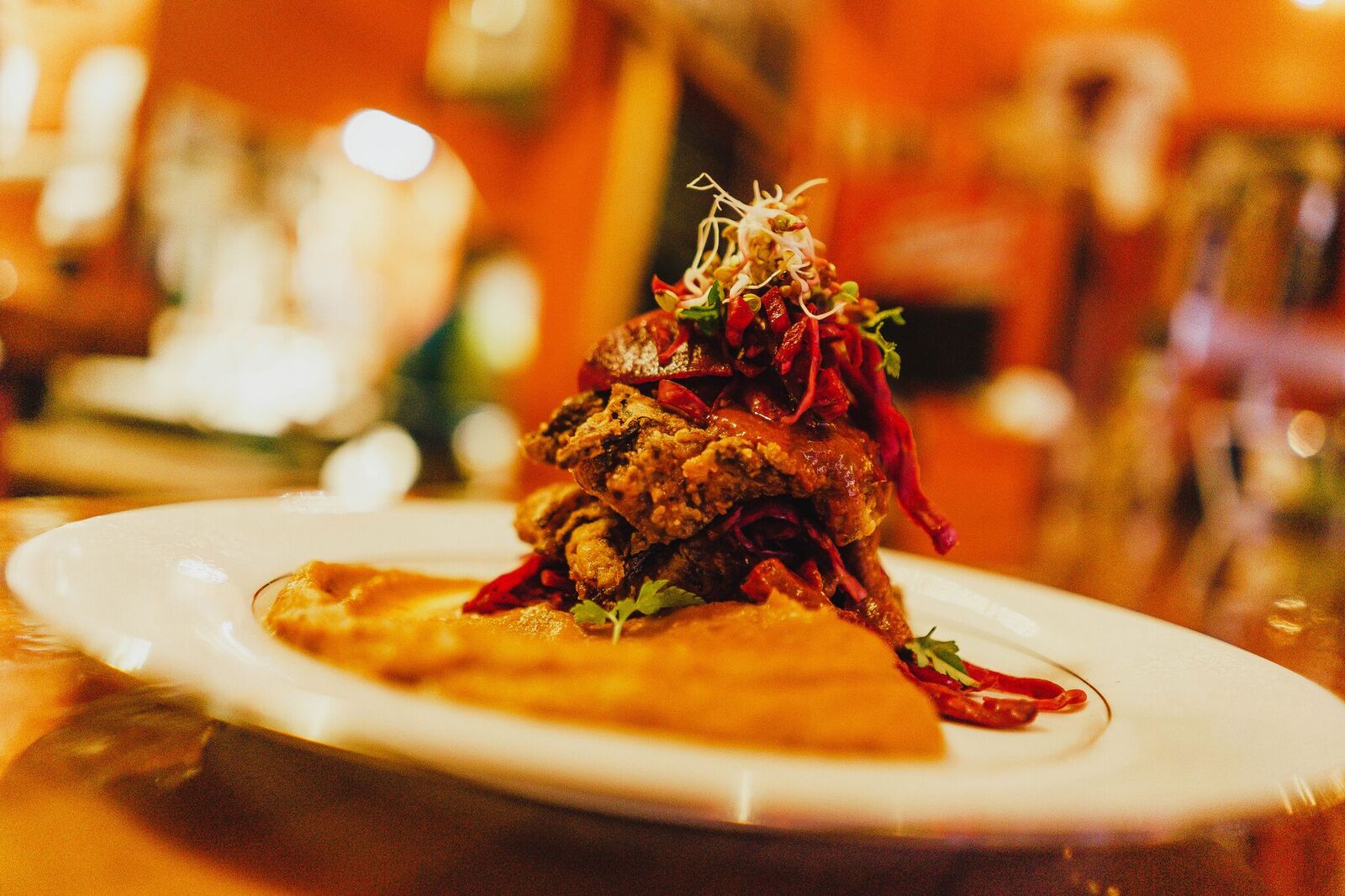 You’ll often hear Nighthawks’ chef and co-owner Josh Coletto described as “punk rock.” While he may operate by the uncompromising ethos of that genre, the music he’s played as of late hasn’t had much at all to do with the actual sounds of punk rock. In fact, Coletto’s musical offerings have been much more complex, textured, theatrical, nuanced than the broad “punk rock” label can possibly convey.

Similarly, Nighthawks is often referred to as a burger and beer joint. There’s no disputing paying customers can purchase both a beer and a burger at Nighthawks, but to attempt to distill the essence of the place to that simply borders on criminal. Nighthawks is built on Coletto’s uncompromising principle that all the food he cooks should be locally sourced. The meat handled in Coletto’s kitchen comes from local farms as do the great variety of vegetables that end up being cooked up into Coletto’s adventurous chalkboard menu entrees and small plates.

Burgers are always available but what is truly exciting about Nighthawks is Coletto’s inspired experiments. On a Wednesday you could have a burger or pork sous vide on top of pretzel spaetzle and peach-infused mustard. If you pop in for lunch you’ll find a host of dishes full of fresh vegetables accented with dazzling spices. 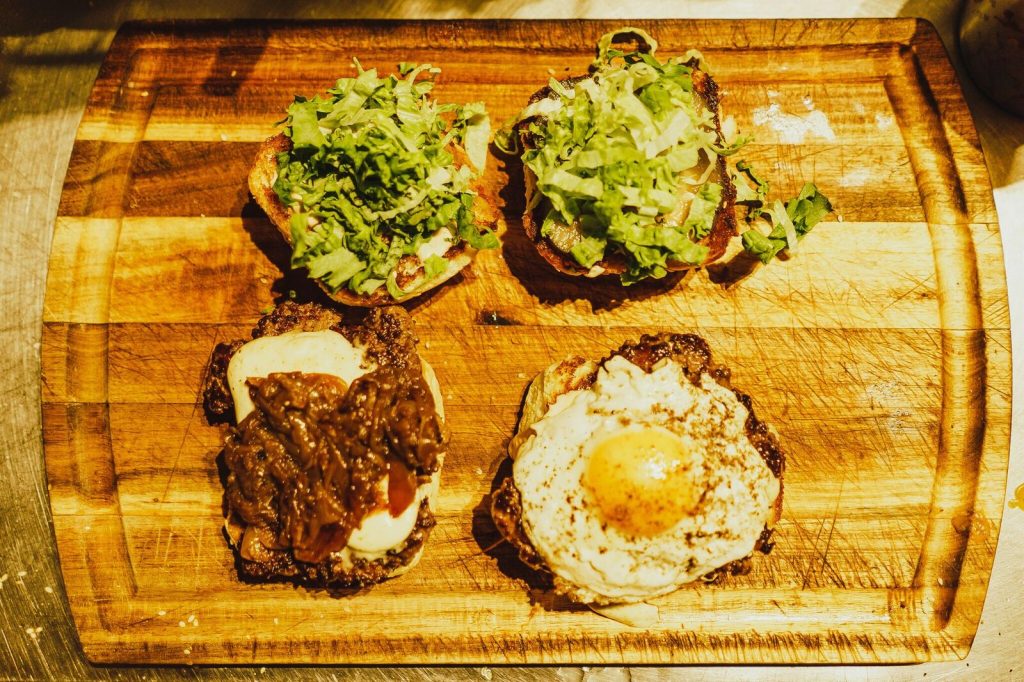 Through his innovative pop-ups and provocative dishes over the years, Coletto could have worked anywhere. But compromise was out of the question. Nighthawks represents the culmination of Coletto’s will–his refusal to be satisfied working for someone else, taking orders, pursuing someone else’s dream.

“Would I recommend someone else take this path?” Coletto asks. “Not unless they want to be broke and have their credit cards maxed out,” he says without any hint of regret. “In the end they are just numbers on a screen. I have a house, a family and a restaurant. I have my restaurant. I mean this is it. This is what it was all about.” 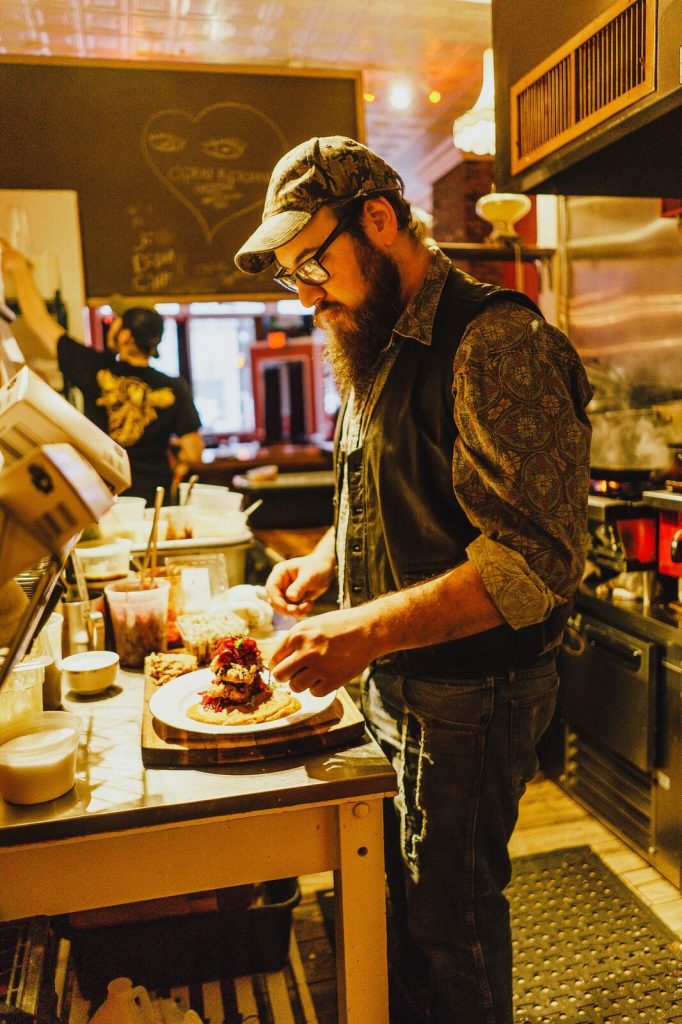 Coletto arrives at Nighthawks on a Wednesday afternoon with a black guitar case in hand, a smile cracking through his bushy beard as he deftly avoids the dirty remnants of collapsing snow banks and quickly expanding puddles.

A group of young women with hair dyed a range of fluorescent colors sit in one corner chatting. The table just one chair over is populated by a group of grey-haired men in business suits. A notorious local restaurant critic finishes up his lunch and greets Coletto with a handshake and promptly begins to commiserate about upcoming events. The front of the restaurant is a veritable obstacle course of business meetings just waiting for Coletto. There’s a beer distributor, a man waiting to discuss a planned pop up with event posters in hand and a journalist. 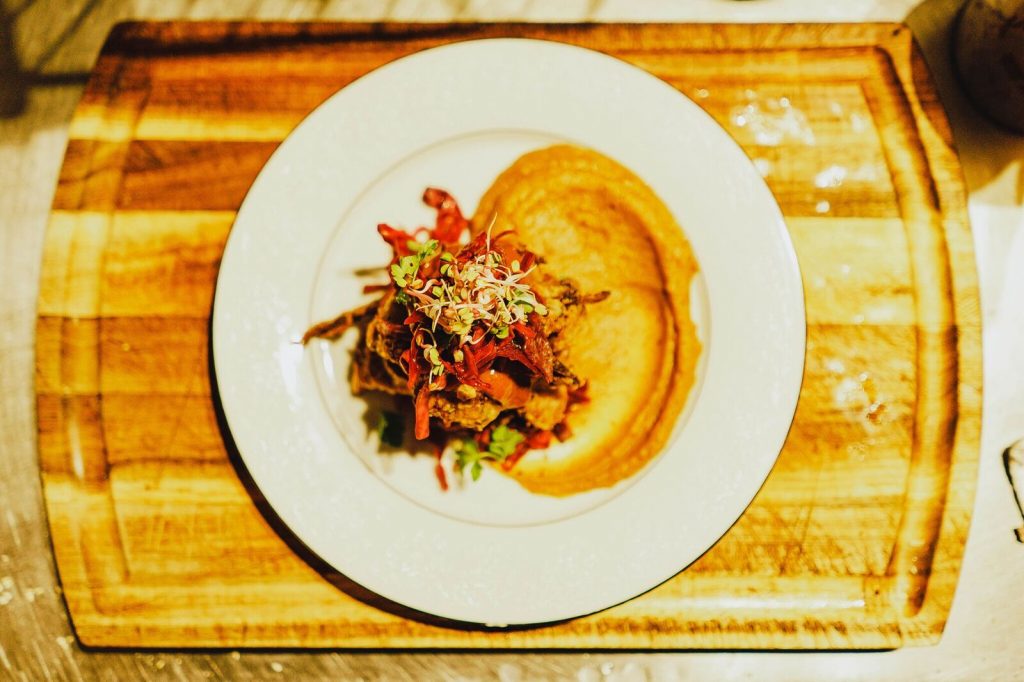 When Coletto graduated from the Culinary Institute of America in 2007, he left the area for Oregon and focused on various musical projects while working in a number of kitchens in Portland. There was a lot of touring and couch surfing.

Returning back to the area, he was still focused on music but then that started to change. “When I came back no one was really anything doing anything in food that I was passionate about, or that I felt strongly about. Coming from Portland where everything felt so fresh and new with young people doing really cool stuff, I saw all these people still doing the same thing they were doing 15 years ago. No one was willing to do something weird to see how it works. So there was that and I really hate working for other people.” 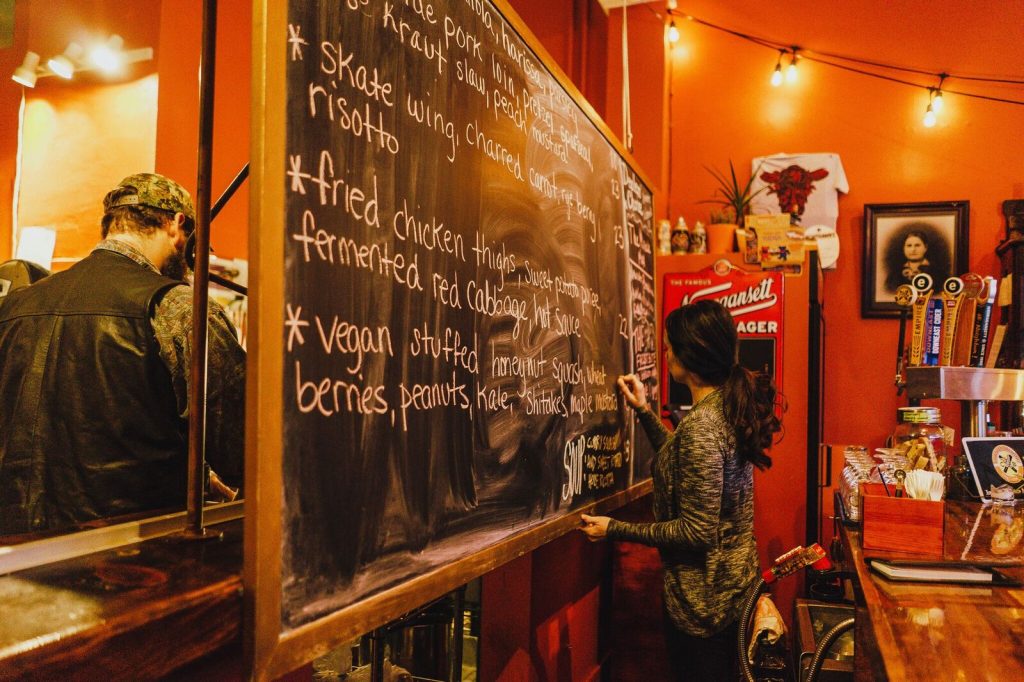 Coletto said he’d bring his ideas to job interviews only to be rejected, flatly.

“Since I’d booked shows since I was 16 years old I thought I’d just do food the same exact way I booked shows—find a venue, have a menu instead of bands, hand out flyers, call everyone up. People are more into food than punk music around here so it seems to work a little bit better,” Coletto smiles and then chuckles.

His imaginative pop-ups out of Peck’s Arcade got people buzzing. He launched The Flying Chicken. He hosted cookouts at The Cheese Traveler. He worked at a few local kitchens. And then he had an idea. He really wanted to cook brunch, but his boss at the time wouldn’t let him.

Howard Glassman, the owner of The Low Beat, did. “I’d ask my boss if I could do this or that and he’d brush me off or say ‘no.’ I’d helped Howard setup The Low Beat menu when he first opened so I asked him if he’d be interested and he said, ‘Do whatever you want. I don’t care!’” Coletto says.

It was a wise choice. The Rock N’ Roll brunches quickly developed a kind of following that would leave a line out the door and trailing down the block.

“You don’t see lines out the door for concerts at The Low Beat,” says Glassman. “But you did for Josh’s brunch.” 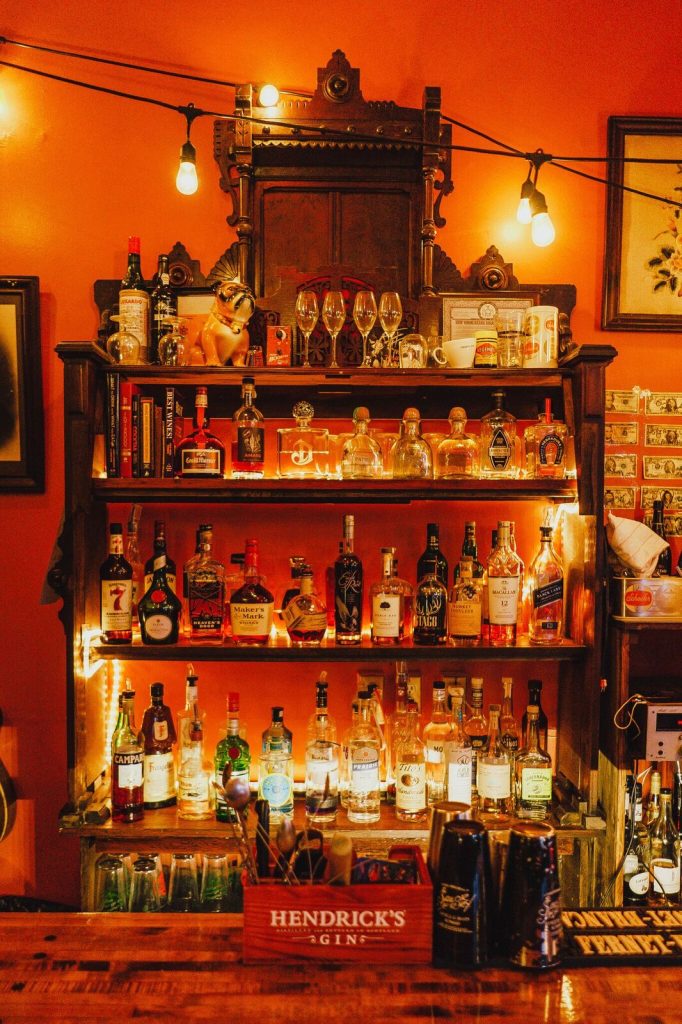 Eventually, the brunches came to an end, but Glassman told Coletto he’d be happy to open a restaurant with him if he was interested. Coletto said he was hesitant to commit to anything. He worked at a boarding school cafeteria allowing him to do pop-ups and catering and felt good operating as a “free agent.”

Then the space on at 461 Broadway in Troy opened up. The pair decided it was time to act and with the assistance of a silent partner, family, and friends, they got to work transforming the location. Wooden counter and table tops went in. Glassman oversaw the bar as Coletto devised how to utilize all of his connections at local farms. 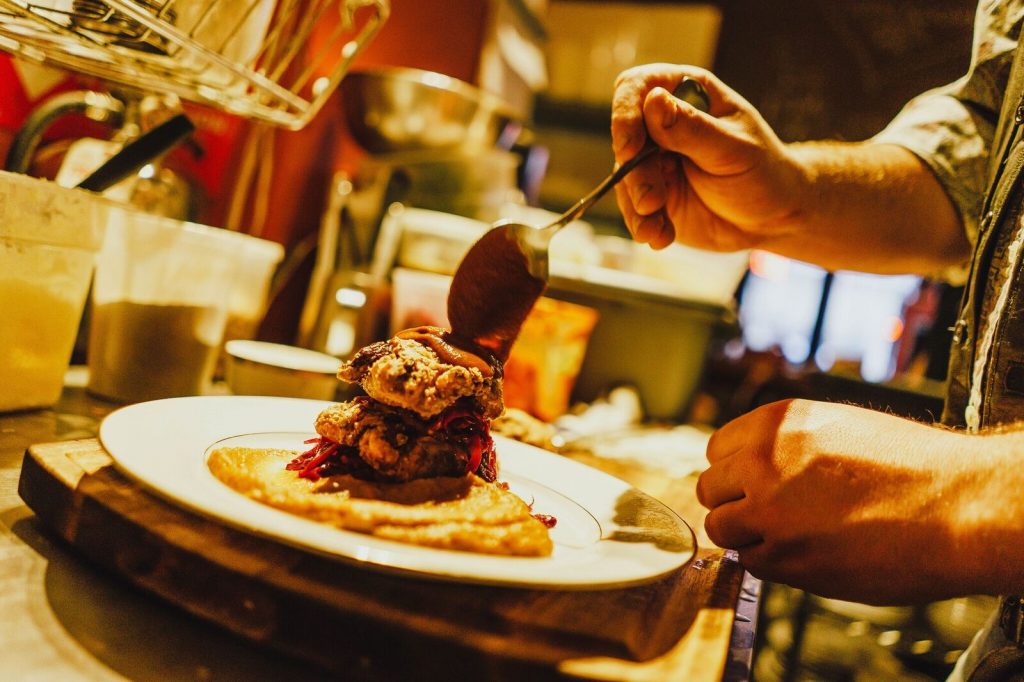 Since then Coletto has had the time to visit farms across the region. He’s networked with farmers and at this point, he’s regularly visited by folks with rarer ingredients, fresh cuts of meat. “I encourage people to just come by and bring me stuff, let me try it.”

Coletto tends to plan the week’s menu on Saturdays. He sits down and goes through ordering. Figures out what he already has on hand and then, as he puts it, “I stare off into space for a while until I come up with enough ideas to fill a menu.” The results are quite tasty. 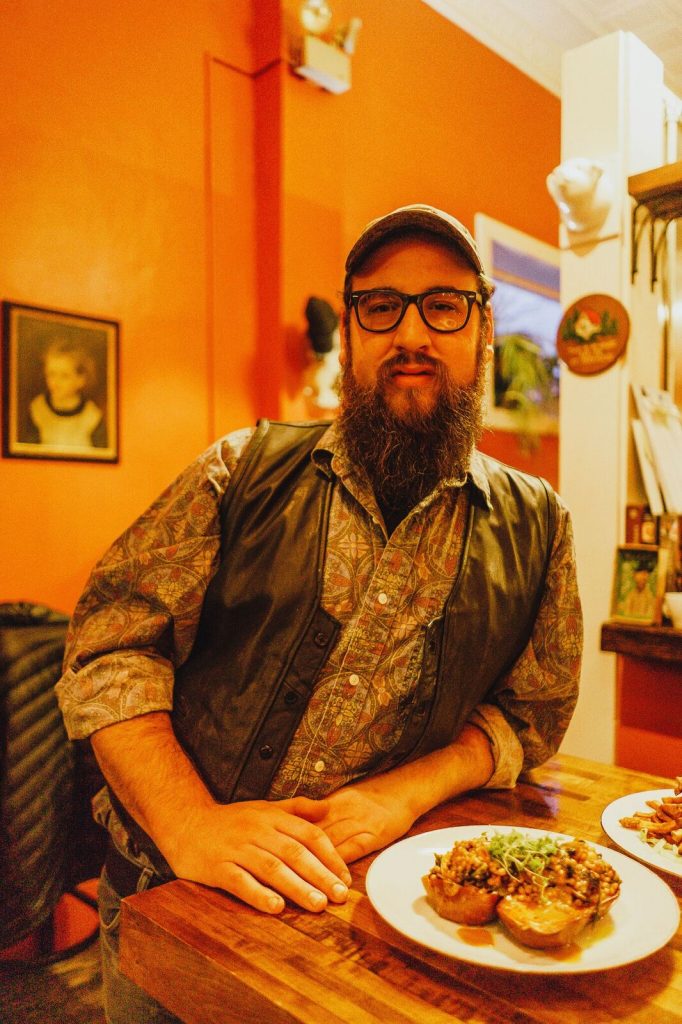 Nighthawks isn’t just a showcase for Coletto. He doesn’t have a problem ceding the stage to other chefs. At the time of publication Coletto was planning to host at least two pop up in the coming months

Music remains an important thread for Coletto. He currently fronts country act The Brule County Bad Boys, who headlined The Hangar on the Hudson in February. He acknowledges that owning a restaurant and being the father of a one-year-old hasn’t made it easy to practice but he’s connected with a group of regimented seasoned musicians. “It’s just something I have to do or else I lose my mind,” says Coletto. 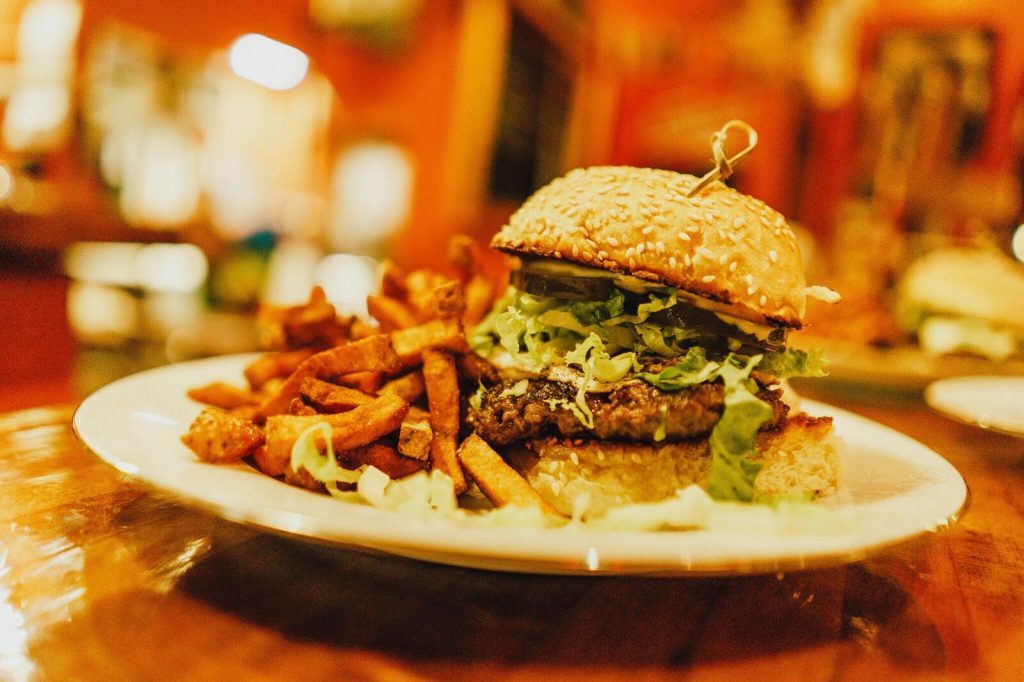 Women’s Unity Brunch on March 8 from 10:30 AM to 4 PM in conjunction with Unity House. The event will feature a menu designed by the women of Nighthawks and celebrate the women of Troy.

Dining For Justice on March 24 from 5 to 8 PM to raise funds for immigrant families detained on the border.

Interested in checking out some of Coletto’s musical output? Here are just a few of the projects he’s been involved in.

Sallow– Coletto was behind the kit for this introspective black metal group whose work was released on German label Sickmangettingsick. Listen to Coletto’s snare rolls and work on the kick drum and imagine what he can do with a meat tenderizer. 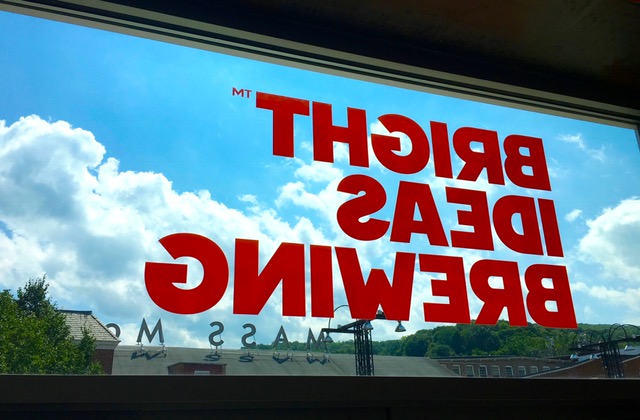 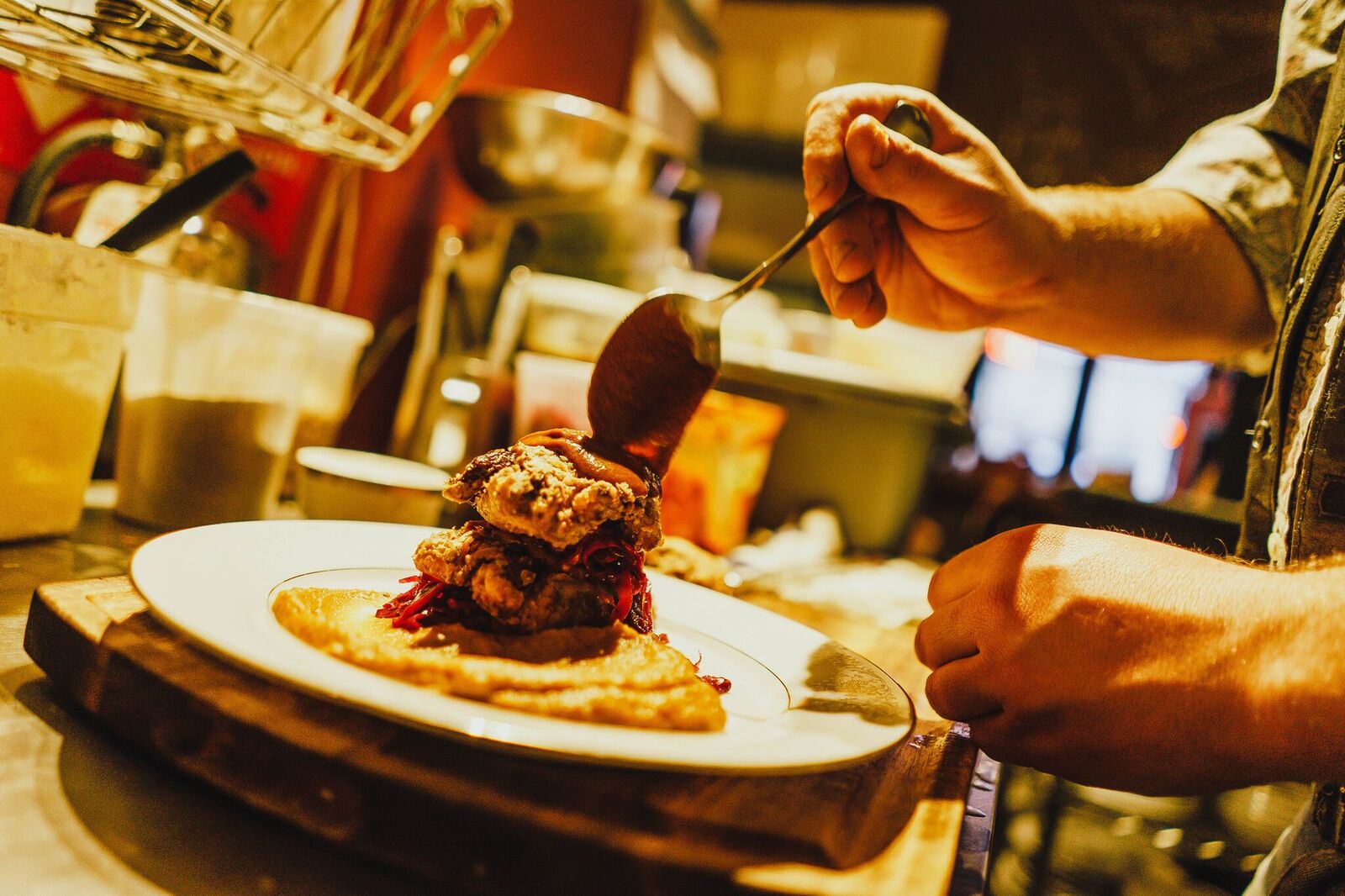