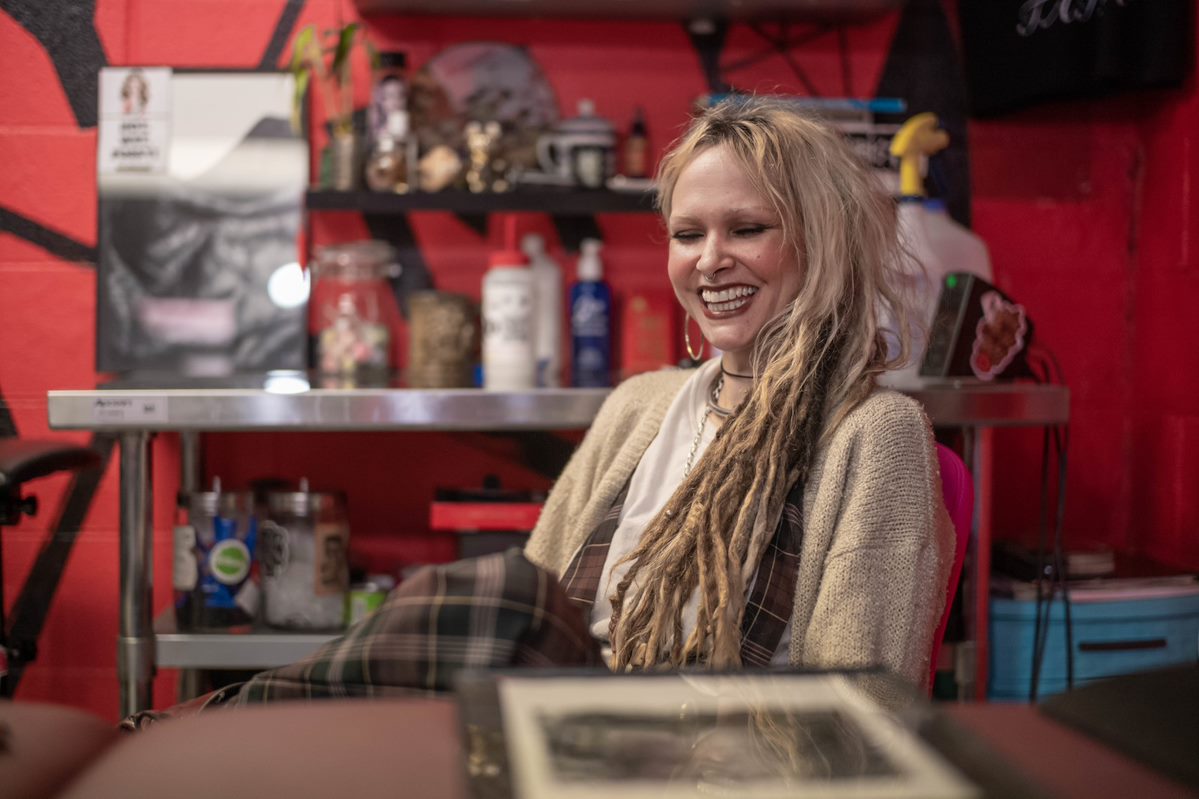 A tattoo artist’s booth can reveal a great deal about the person within and Courtney Covino has an unmistakably unique style. There are any number of self-fetishizing online personalities in the region whose looks fade in the light of reality. They eschew their hard-won styles when not on view of their audiences on Instagram. Covino lives her style full time. It is baked in a permanent mark as indelible as a tattoo.

We find her working in her booth in Albany, inking the trusting bodies of an ever-expanding and happy clientele. 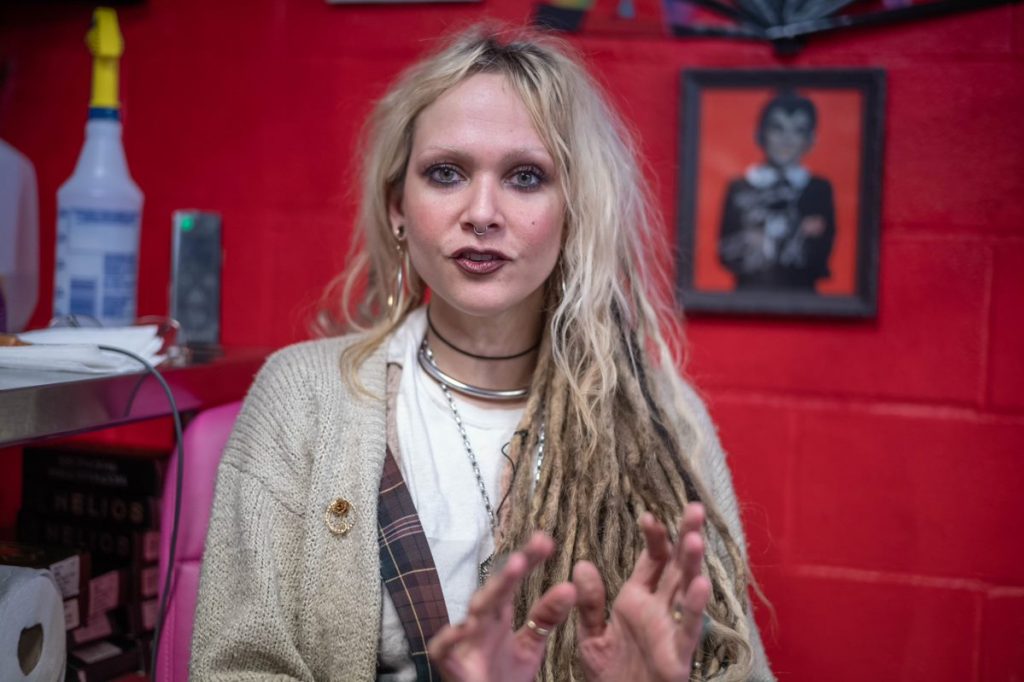 The day I visited her workspace, she was mimicking a silkscreen by ‘80s graphic artist Patrick Nagel. His haughtily idealized women were as slick as a coke mirror and as sharply defined as a razor. These women were Lamborghini Countach-level poster fodder, Playboy magazine illustration sexy, as rock and roll as Duran Duran, upon whose album cover one resides. The piece chosen by Covino and her client, burlesque artist Minnie Derriere, was of a single woman wearing a leather-boy black hat and black skirt, caught in the process of removing her blouse, exposing half of one breast. Reducing a very clearly identifiable poster image to modest arm-tattoo size may conjure up visions of off-kilter ink of the regrettable type, but not in Covino’s hand. 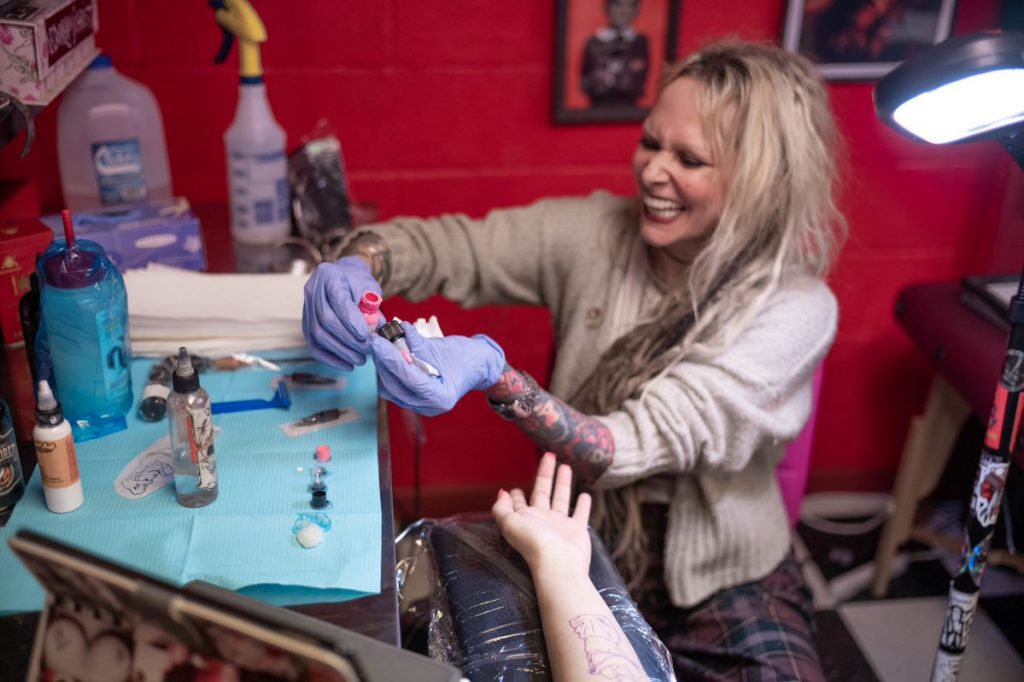 Her tattoos tend towards those dark of line, but never crude. There is a lyricism in her hand, a dance in her lines. In short, Courtney can draw. Like Nagel, her use of color is subordinated to an accenting role and carefully crafted black lines rule.

Serially unimpressed with her own sketch output, she only recently began to use somewhat better than copier paper for her Prismacolor black pencil creations. Through her exercises, she strives to train her eye “to see what is really there.” In the process of creating them, the world’s most marvelous, hidden details are revealed to her. 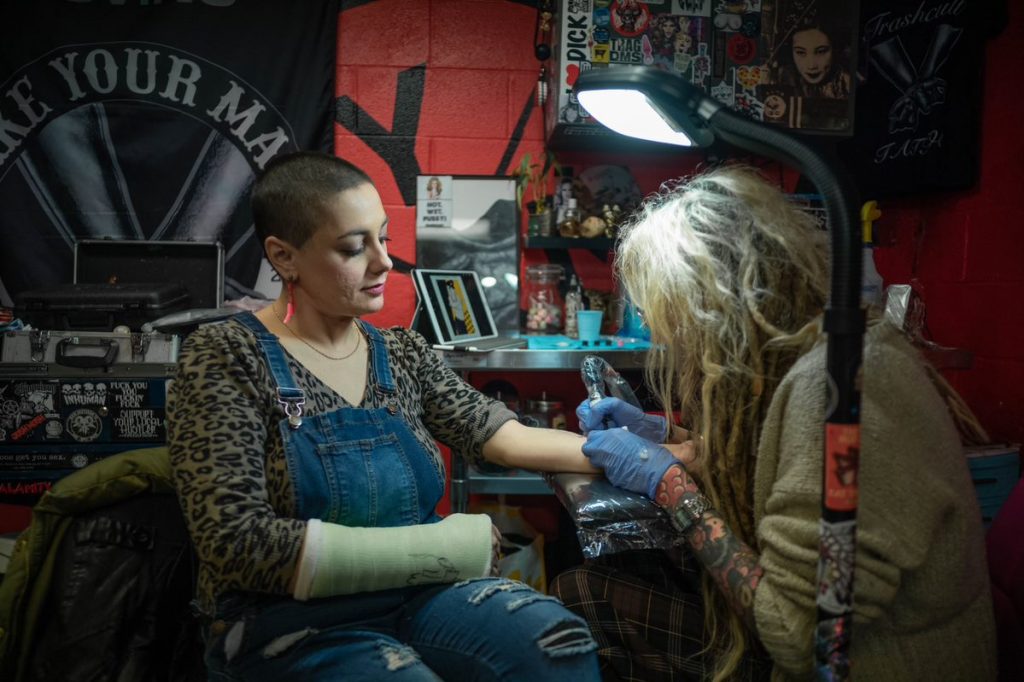 Minnie arrived for her session in signature, off-duty coveralls. The arm intended for ink was thrust forward as she approved the sketch to be transferred there. After much buzzing and chatting and little apparent discomfort, the inked Nagel, rendered in fine needles, was a success.

Courtney’s face, however, flashed an expression betraying an unspoken critique. A critique to grow from, a client’s request birthing a teachable moment. Better next time, better next tattoo, until there is no skin left to mark. 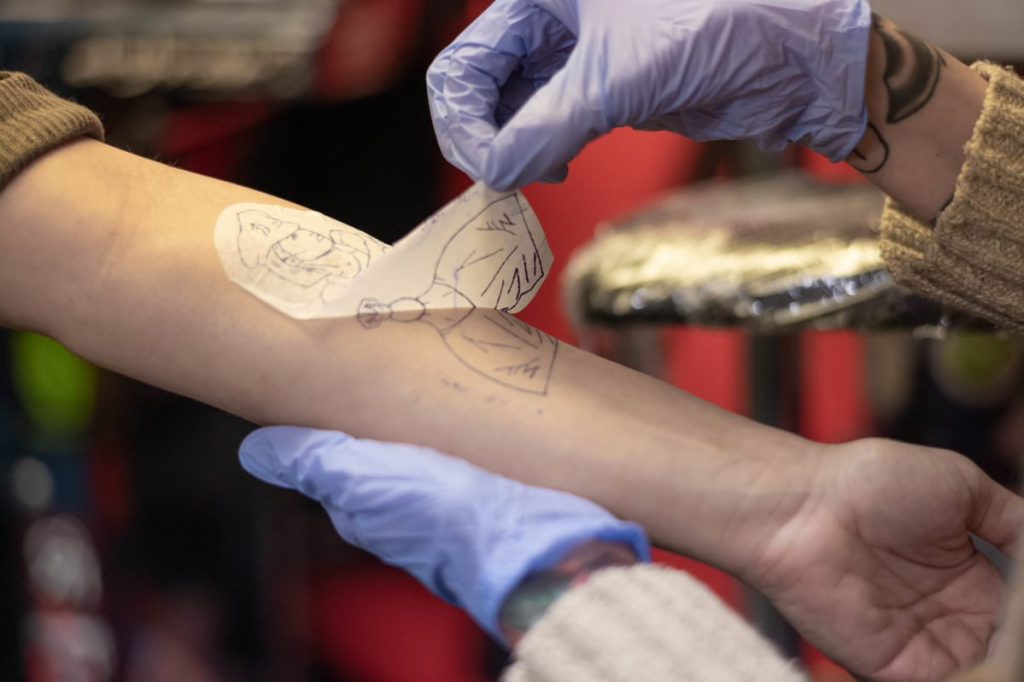 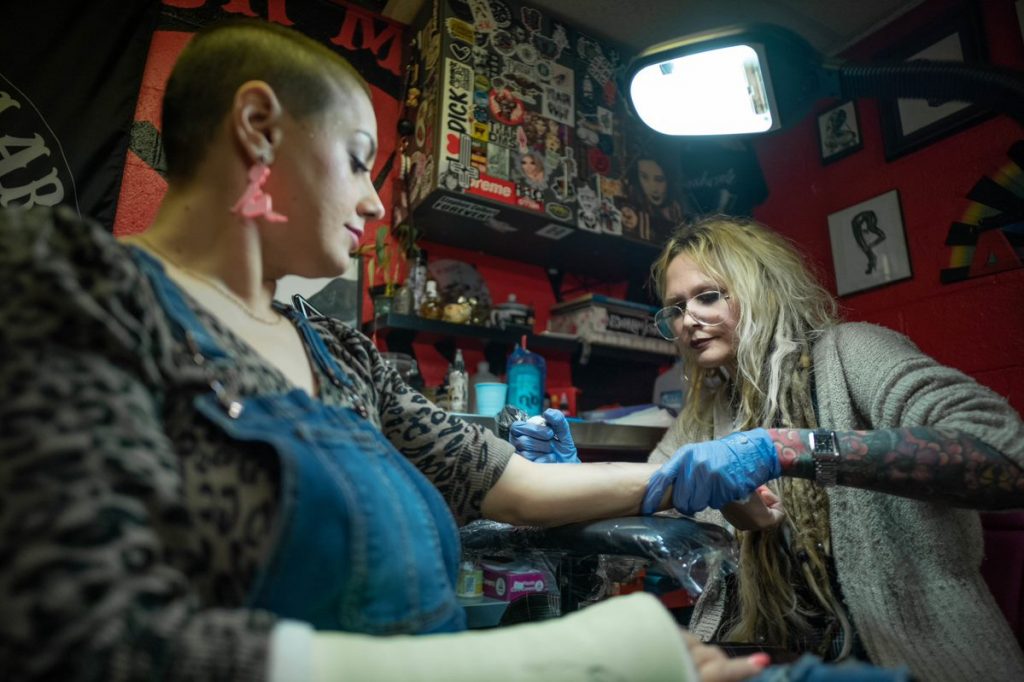 Her “don’t take yourself so seriously” attitude is another trait attributable to her inner, nightmare-art-professor and one that serves her well as a professional artist. She is a taskmaster that insists on her own self-betterment and she is usually, unsurprisingly, somewhat disappointed in her progress. 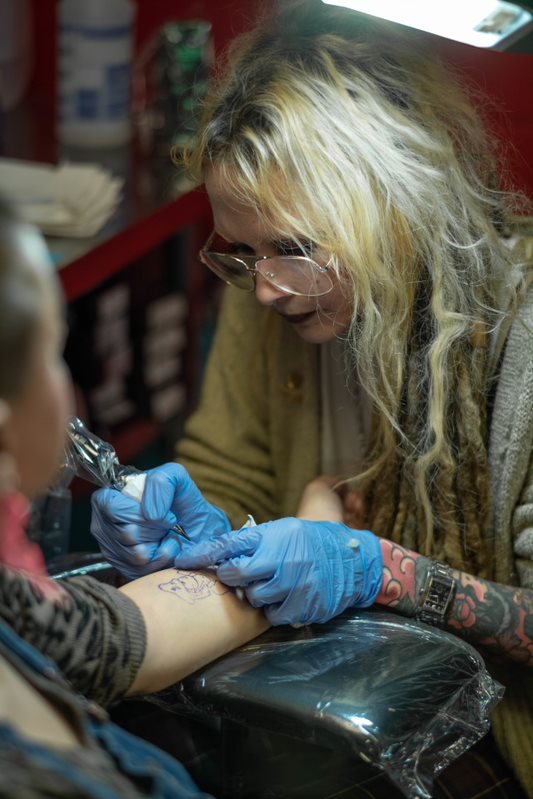 The stringent discipline of her personal sketch work benefits Covino’s eye and hand when a client’s skin is her blank canvas. As she sees it, a tattoo artist never knows what new challenge will come through the door. So she studies, prepared for any request, as when she was asked to ink a deft, photo-realistic portrait of the late Sharon Tate. Photos of this piece read as a lovely pencil sketch, before betraying texture reveals the fleshy truth of her medium. 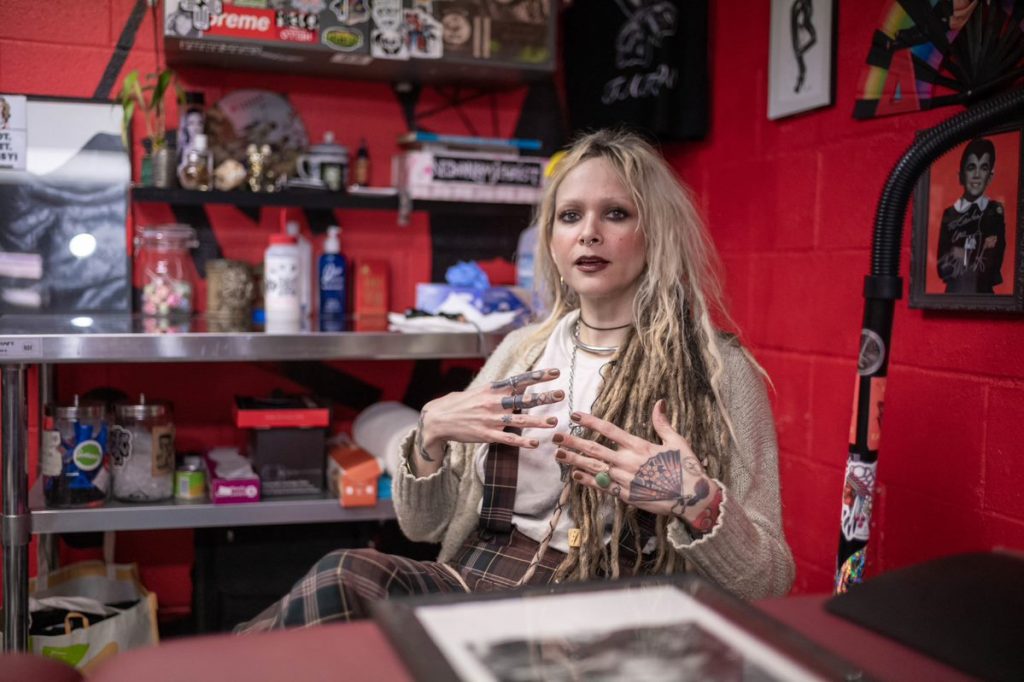 On each person, the skin might differ inch by inch. These mercurial human canvases pose unique challenges, whose built-in risks stimulate Covino, although the challenges produce little in the way of instant gratification.

Raised in Queens, Covino started drawing seriously at 16 years old. Photos of her work, taken by a supportive dad, paved the way for her admission to SUNY Purchase for visual arts with a major in photography. Once she returned from her post-explosion forced hiatus, she devoted herself with renewed seriousness for craft.

Her interest in tattooing began with her first ink at the tender age of (ouch) 14. By 18, she was ready to try her own hand, friends volunteering their limbs. Limbs upon which Courtney’s efforts frankly failed, but her work improved with painful practice for all concerned.

Asked to sum up her life, Courtney says simply, “I create.” Unmistakably an artist, she is continuously growing, in both talent and range. 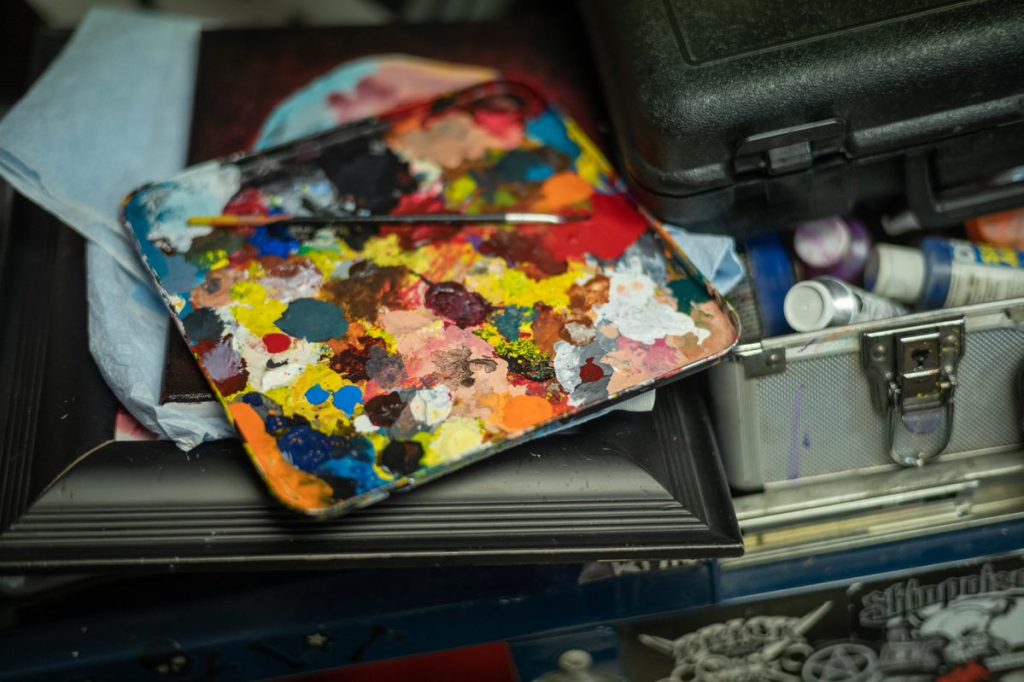 Her next big things? Public drag performance with Ms. Derriere. Women in a drag show?

“Of course,” quips Covino. “Drag to me was always about gender bending. I grew up watching ‘Rocky Horror,’ ‘Divine,’ listening to Boy George and Grace Jones. I’ve been a member of Elvira’s fan club since I was three (thanks Dad!). It’s about the art not the parts ya know?” Word.

She is also increasing the frequency of her “outfit of the day” and makeup tutorial postings, with instructive commentary. This is an experiment, a boon for fashion geeks and an all-round pleasure for her followers. Be warned, fandom happens before you know it. All of this goodness plus drag, lifestyle art and that which she adore can be found on her YouTube channel. She was inspired by both the wonderful things she was seeing and what she felt was lacking. 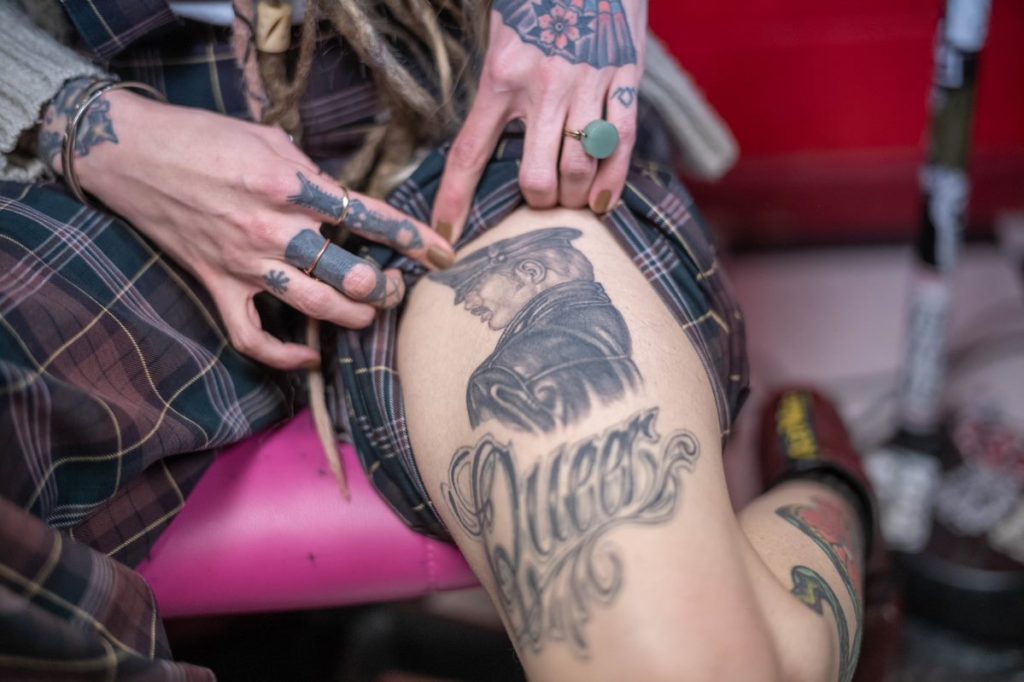 Covino is striving for perfection and her disciplined work ethic doesn’t contradict at all with her playful dress-up and make-up experiments. There is room for both, much to our delight.

If you are in the mood for more ink or perhaps considering your first tat, Courtney would adore making it happen. She is available for commission illustration work, you need only reach out on social or grab her phone number from Instagram @courtneycovino. 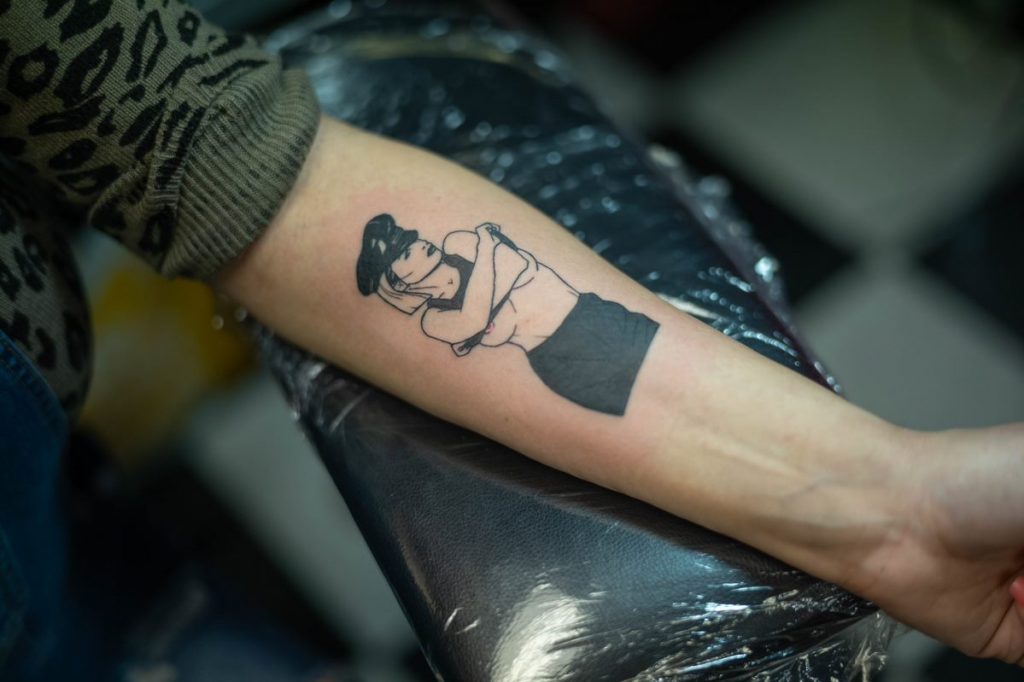 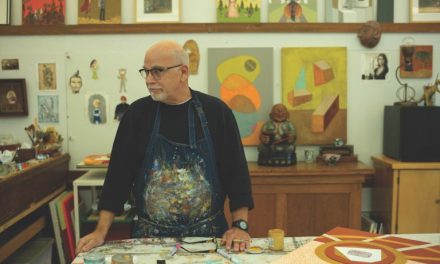 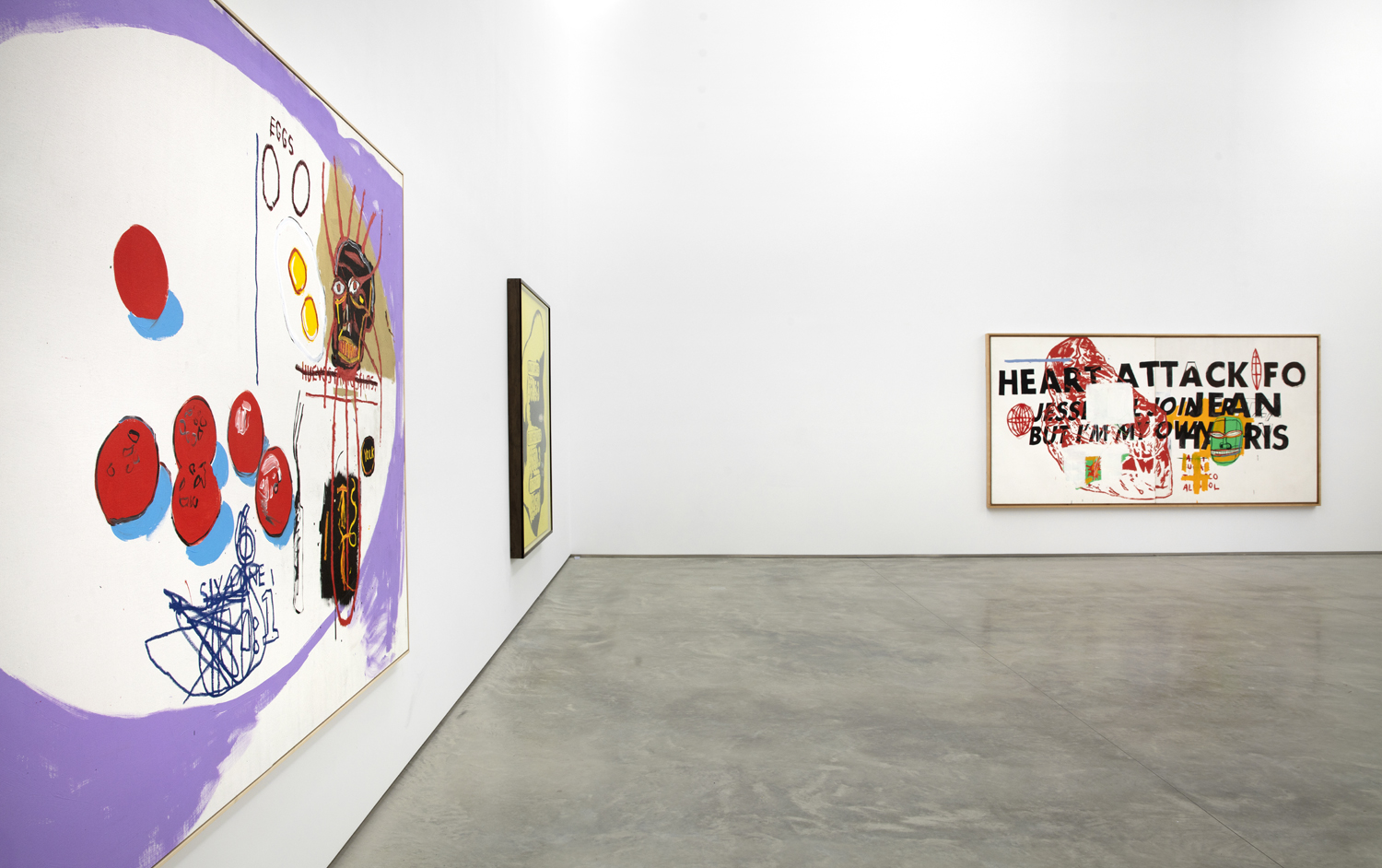