Fifty local artists were given skate decks by Belinda Colón at The Arts Center of the Capital Region in Troy, with the simple instructions to decorate, disassemble or transform them for the skate culture exhibit “In Ply.” A few artists, primarily painters, took the time to give The Collaborative a sneak peek into their process and the influence skateboarding has had—or now has—on their life and work.

“Belinda is wonderful to work with and I think I like [this project] so much because she is really community based,” collage artist Robert Gullie said. “I’d always wanted to do one of those horses [in Saratoga] or the dogs [in Albany] but thought, ‘Jesus, that’s overwhelming.’ But this is a wonderful opportunity to not only get money for the kids, for their skateboarding, but also for me to ease into this kind of thing. It’s a challenge to apply stuff to three-dimensional objects. I had never really done stuff like this before.”

Gullie and Fabian Lopez, studio roomates at The Church in Troy, were given a pair of decks, though Gullie ended up finishing both in an homage to Lopez after he had to make an unexpected trip back to his home in LA. The collage artist and painter photographed a vibrant color pixel painting by Lopez and attached pieces of the work to the deck in his honor, centered around a character, from his collection of collage material, in the board’s center.

Above (far left): The collaborative deck design by Gullie and Lopez on display at The Arts Center. Photo provided by Belinda Colón.

His own skate deck is painted front and back in gold and brown, with cheery polka dots that surround centerpieces of religious figures that look as if they’ve been cut out of Renaissance paintings. Gullie says he was inspired by a thread of Renaissance themes in his research of avant-garde skate designs that he felt reflected his own style.

“I wanted it to be special,” he continues. “I grew up Catholic so I have a lot of religious icons that I use in my work. I did both sides so I could have one plain and one more regal.”

He’s had the magazine cut-out of Jesus on the cross used on the front of the deck for 10 years, just waiting for the perfect project.

“I actually know what’s in all those things,” he says, motioning to stacks of Rubbermaid containers packed to the brim with trimmings and cut-outs in his studio. “Not where it is but I know what pieces I have and I have to look for it.” 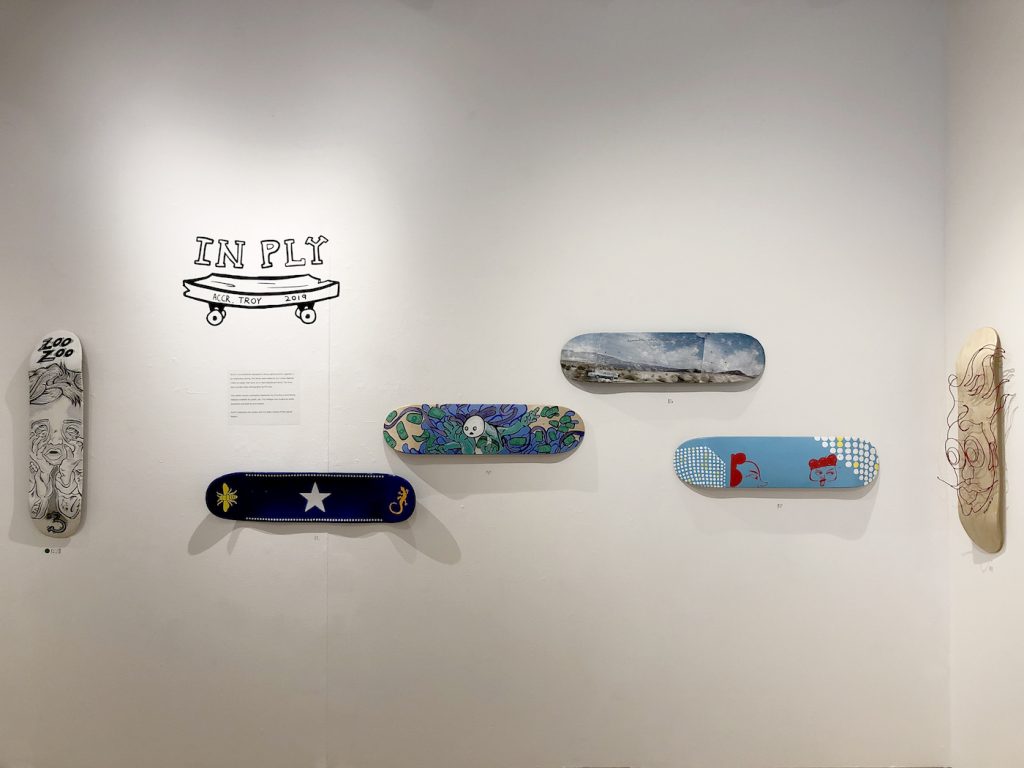 Above (below “In Ply” description): The collaborative deck design by Apfel and Pellettieri on display at The Arts Center. Photo provided by Belinda Colón.

Husband and wife team Fern Apfel and Andrew Pellettieri, based out of Kinderhook, have collaborated on one board together for the exhibit. It’s their first shared project in 30 years.

“After that we were like, ‘Never again!’ But here we are,” Apfel jokes while describing their creative process to The Collaborative. “We’re just gonna bat it back and forth.”

Primarily a painter and collage artist working with found text materials, Apfel is sticking to the bright colors of her still life work. Pelletieri primed and painted the deck a brilliant blue, and the pair has decorated it with icons reflecting the adventurous and wild nature of the sport that has made an impression on the pair during their research.

“We were watching skateboarders online and it’s kind of fabulous. What we realized was that the values of it are really taking risks and being creative about what you’re doing. It’s a lot like any creative endeavor. They’re doing a lot of the same things you would be doing while painting, which is just not holding back.”

Apfel adds that she was amazed by the sense of freedom, independence and individuality reflected by watching skaters in action on YouTube and listening to talks by Tony Alva, one of the original “Z-Boys,” or Zephyr Skateboard team of the early ‘70s, touted as the pioneers of modern skate culture. She wanted that to be the main focus of their artwork.

“It’s fun to watch. You look at it and realize that the person, to have been able to do all those tricks, had to have had an enormous passion for it and worked incredibly hard doing the same thing over and over again until they got it. It’s almost like they’re trying to free themselves from gravity. As a painter, there’s a lot in common … so we wanted this to feel limitless.”

While artists like Gullie, Apfel and Pelletieri joined in with little to no knowledge of the sport and its culture, Death Wish Coffee Art Director and graphic designer Thomas Dragonette is well versed in the world of skateboarding. He’s been at it since his childhood.

“I’ve been skating for something like 20 years, it’s like another bone in my body,” he says. “To me skate culture has always been that ‘against the grain’ mentality. It forced me to think outside the box, ask questions about everything, investigate. Right now, where the country is politically and morally, a lot of my attention has been drawn to that so I decided to do that with my art. I wanted to make a statement, force people to look at something that makes them ask questions internally, ‘How does this make me feel?’

Dragonette’s design, he says, was inspired by the ongoing civil rights movement, current political climate and one of his favorite artists, Public Enemy. 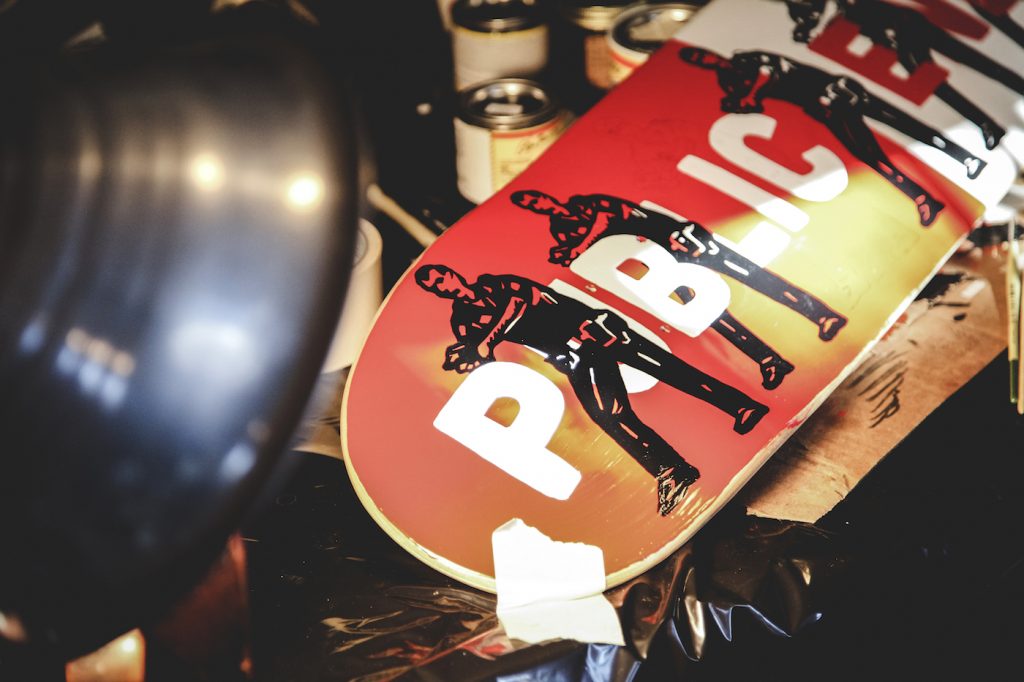 Above: Dragonette’s work in progress. Photo provided by artist.

As a graphic artist who works primarily on a computer, he was happy for the opportunity to use his hands in such a different, time-consuming and painstakingly detailed way. Each of the seven characters took over an hour and a half to paint. It also took a solid block of time to sand down the deck, apply layers of base paint as well as tape, stencil and paint the lettering. It gave him plenty of time to reflect on the statement he wanted to communicate through his art.

“Hand painting allowed me the time to reflect on growing up skateboarding and dealing with officers in my life,” he says. “Growing up under the poverty line and being a skateboarder made me sensitive to inequality dictated by popular opinion. But my experience with prejudice is minute compared to what people of color endure on a daily basis here in America.”

Dragonette says he is inspired by the number of artists who have gotten involved with “In Ply,” contributing time and effort through their art, as well as the woodworkers who assembled the ramp for community use. For him, it makes him feel more positive about the bittersweet way skate culture has developed over the years.

“I love that skating is so popular now and that it’s afforded people who dedicated their lives to it the opportunity to actually make money and survive off something that they love. But I kind of have a broken heart about it. On one hand I have friends that are professional skateboarders and are valued on the same level as other pro athletes but on the other hand I hate how corporations have exploited the soul of the culture just like in hip hop or any subculture that gets brought into the mainstream. But I think the pros outweigh the cons.” 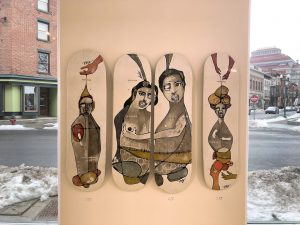 Above: A view of the front window facing the street from The Arts Center’s main gallery. Photo provided by Belinda Colón.

“In Ply” is on display through April 5. Meet the aforementioned artists, as well as the other talented creatives featured in this exhibit, at the public reception on Feb. 28, 6-8 PM. Stick around afterwards for a free Super Dark Collective show featuring local punk bands Wet Specimens, Mystery Girl and Eternal Crimes at 9 PM.

A post shared by Super Dark Collective (@superdarkcollective) on Feb 6, 2019 at 4:28pm PST