This article first appeared in The Alt on September 19, 2017.

Their story starts out like many others. Chapter one opens with a few music-obsessed high school kids looking to form a band. They gather a following, a brand, a sound. On the cusp of their climb to local notoriety, the age-old antagonist of time rears its ugly head. Band members drift, jobs become demanding, school work piles up. A number of bands have built and collapsed when faced with these same obstacles, but for the past two years, Good Fiction has found a way to keep going. After a nine-month hiatus, the Clifton Park trio is back with a new bassist and bombastic sound.

Patrick Grace (vocals, drums), Alex Wollyung (guitar) and James Johnson (bass, sound engineer) have spent the past summer hustling. The three parts of the self-described “fuzzy rock” band have played nearly a dozen shows around the Capital Region since their reentry to the scene at the Brown’s Brewing Co. Summer Session, stretching their legs after Grace and Wollyung’s recent college graduations and Johnson’s introduction to the band.

“That was his first show ever with us… we played close to 500 people,” Grace recalls of the June show. “We told James, ‘Don’t expect every show to be like this because dude, this is the pinnacle.’”

Unlike many of their young rock band counterparts—who make their way up from basement shows and bar gigs—Grace, Wollyung and their original bassist Taylor Abbitt played large stages and some breakthrough openers at their start in 2015. They picked up their first show at Upstate Concert Hall, played a set at Alive at Five and once opened for X Ambassadors—as the Ithaca electro-pop group made their big break—at a free show at Rensselaer Polytechnic Institute in Troy.

This time around, they’re doing things a little differently.

“We always felt out of place in some respects,” Wollyung said. “When we started out, we thought it was best to start out in an actual venue and try to play these big-spectacle shows. Now we’re kind of reeling it back. For one thing, we’re looking at way more DIY basement shows on top of setting up our own shows.”

The trio found that while they were playing to a larger number of spectators than they would find in a bar or basement, it was much harder to make a connection with their audience and build a solid fanbase.

“We’ve kind of done a weird backwards thing,” Grace adds. “I have this schema of the traditional route to start gaining a following as a band and that means looking to venues and promoters, now we’re back scaling. It’s actually cooler to be more grassroots… Each have their place. It’s not that one is necessarily better than the other. We’ve realized that there’s no such thing as being that one kind of band anymore.”

However, Wollyung points out that much of their early booking success is owed to the massive support they found in venue organizers such as Upstate Concert Hall’s promoter Ted Etoll; and credit for the most of their exposure is due to the local radio station WEQX and the support culture of the local music scene.

“We sent them an email with our info and before we knew it we were playing with Stellar Young,” he said of the radio station. “All of these bands that we grew up listening to on the local hour, it was cool finally getting a chance to jump right in and play with them. This area is really good with making that possible.”

“There’s a lot of support for original music around here if you really show that you’re working hard and trying to hustle, pumping out something with any artistic value,” Grace added. “Mainly from the scene, it’s not as much from the general population. To be honest, it’s not easy to get a lot of people out to your shows around here, but you can always count on other bands, musicians and the radio to be like, ‘Yo, we’re gonna support you.”

The band has been working on a new album since their regrouping with Johnson, who Grace calls “a Swiss Army knife of music.” The bassist’s experience with a variety of instruments—including acoustic and electric guitar, drums and keys—as well has his repertoire in basically every genre except rock, has given the band more room to explore their playing ability. Johnson’s side interest in sound production and lighting has also aided the band in filling out a room and building a persona.

“There’s three of us, so early on we were like, ‘We need to figure out how to be as loud as possible,’” Wollyung says of the band’s massive sound, inspired by the likes of Royal Blood and Queens of The Stone Age. He has also taken notes from “hometown hero” Josh Carter of Phantogram, who uses reverb to fill space between the beats.

“It’s more of a swagger rock,” he explains.

While the garage and punk scene is prevalent in the region, Good Fiction can’t seem to find a genre where they can fit in.

“Around this area, there’s been a lot of a garage, surf rock scene that’s been happening, with the reverb, heavy sound. We’re going for more of a punchy sound, where the speaker is like, combusting,” Grace said, his eyes brightening.

“On the last record that we just recorded, I took more of Death From Above 1979,” he continued. “I really wanted to kick in that bass tone, to make it really gritty and fill up that space and use as much as we can harmonically.” The singer also looks to Jack White for inspiration when putting a track together, whose work in The White Stripes sparked Grace’s passion for songwriting.

Their new record is set to be released by November, but the band hasn’t set a date yet, chalking up its ambiguity to budgeting, show scheduling and band members’ availability to spend hours in Grace’s makeshift basement studio to record. Wollyung and Grace have full time jobs and Johnson is still studying music at The College of Saint Rose in Albany.

In comparison to the group’s first EP from January 2016, the trio has buckled down and found focus—particularly in forming a lyrical structure that was previously nonexistent.

“[It’s] more of a structured, artistic work rather than just three dudes jamming in a basement until we find something,” Grace said. “Before, the music was the vehicle for the inspiration, we would just be playing and whatever would come out of my mouth would be what we worked with. This time around, I knew what I wanted to write about.

There’s a concept to this new record—you can hear it in the quickening tempo and thrashing beat, in the tension of Grace’s vocals. They’re drawing themselves out, almost too far: It’s desperation.

“Being a singing drummer, I sound strained when we’re live—because I have to be—but I kind of wanted to encapsulate that vibe in the lyrics as well, that desperation.”

In their latest track, “Like I’m Your Man (For Real),” hostility seems to be pushing to the surface with every beat, never quite making the surface. The trio picks up the pace between the verses like a marathon runner training in sprints.

“I’m chokin’/ suffer from asphyxiation,” Grace cries. Wollyung rips into a frantic, rolling solo before the drummer-vocalist breaks back in, pumping blood into the song through his kit, “You make me feel / like I’m your man for real.”

The new single is available via streaming on their website and the band plans to continue dropping tracks and records in this way for the foreseeable future, free of charge.

“Music is kinda free anyways. It’s good to hype up your stuff because it is your work, but it doesn’t have to be this one date where everything just hits. We’re not Beyoncé,” Grace shrugs, laughing. “It’s part of just understanding where we’re at. As long as we get the music out there and people like it–and we’re playing for people–that’s all we care about.” 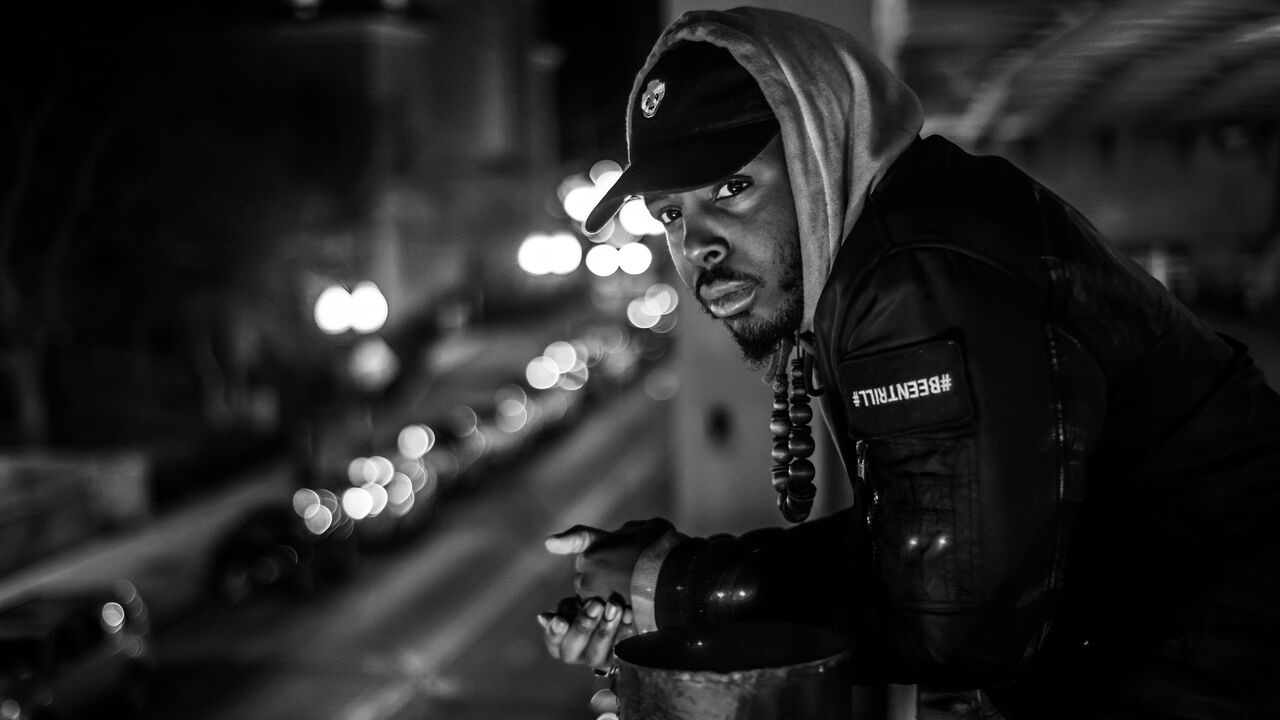