On Oct. 27 of last year the pair performed at Basilica Hudson as part of Pioneering People Basilica Benefit: Courtney Love. Basilica’s owner Melissa Auf der Maur played with Love in Hole and the night was both a celebration of Love’s work as a feminist punk rock and movie star and a public reunion for the former bandmates.

A host of artists including burlesque acts and legendary musicians like Roddy Bottum of Faith No More played opening acts. Celebrities like Michael Stipe, Marc Jacobs and Natasha Lyonne were expected to attend.

Bielski and Anger, who are cousins, were prepared to deliver a skit they’d worked out that played on the dynamic they’ve used in other creative projects—the odd cousins, one bad and angry the other good and happy. They’d use the lyrics to Hole’s “Good Sister, Bad Sister.”

In real life the pair give off the corresponding vibes: Bielski speaks calmly, smiling with a  reassuring tone; Anger speaks in rapid fire, loud, confident, brash.

It seemed maybe, too easy?

Things didn’t go as planned. Some guests called in sick, and other scheduling mishaps meant they’d have to perform much earlier than expected. The rush for time led to an escalating series of mishaps. Instead of ruining the performance it made it more compelling and, according to the performers, it gave them a better sense of the woman they were honoring.

Bielski: We’ve developed this bizarro cousin routine. We’ve collaborated in a band before and we’ve done video stuff with it using this dynamic, or even at party we just fall into it. So we chose this Hole song “Good Sister, Bad Sister” and we didn’t even listen to it. As part of the process we just started reading the words and riffing on it. We saw it as instead of being two women it being lots of women embodied in one.”

Anger: We are a very different kind of performers, not trained dancers or singers; in fact we’re pretty bad at all of those things. We realized we wanted to literally embody the exact lyrics of the song. We wanted to embody this spirit of a woman against all odds. Annie comes to this from painting and comedy background and I come from a film/cinema background, so I was thinking in terms of staging and she was thinking more character based and I devised this idea of what if her clothes we’re coming off, what if everything was literally coming at her very literally against all odds. What if a fan starts blowing papers at her so her hair is out of place? What if her dress gets ripped off? The lyrics talk about “big blood mouthfuls of it.” So what does that look like? 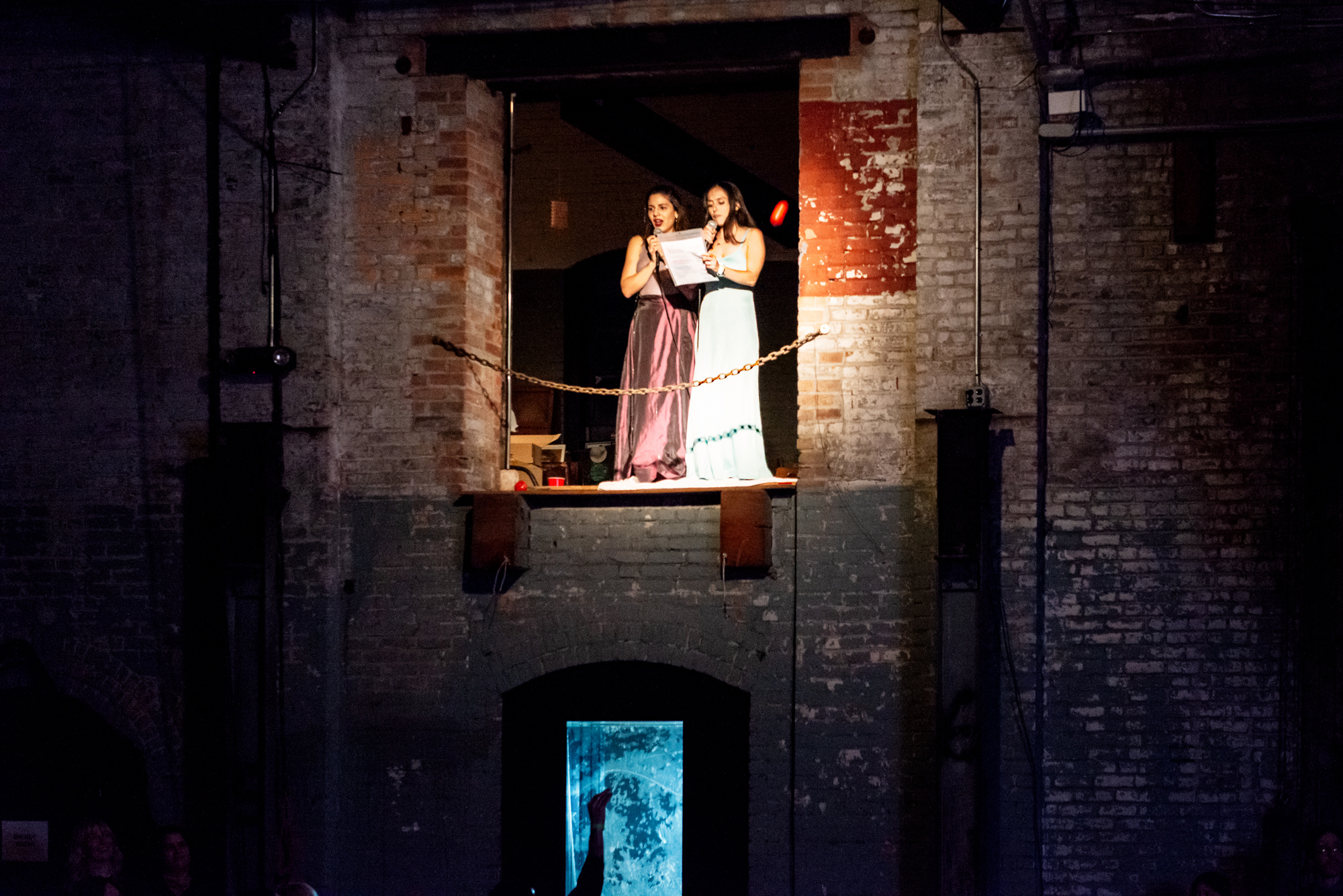 Anger: We spent a lot of time rehearsing, considering it was such a short thing, a lot of time conceptualizing, rehearsing, getting the mouth blood just right, the dress lift just right, to make sure the straps come up at the right time. Then half an hour before we go on, we we’re holding the list that said the set times and we knew it was half an hour away so we started getting ready. We’d performed it so many times so we are just sitting there casually deciding what lipstick to put on someone yells that it’s time to go on. And I think, “It’s impossible! We need half an hour to get ready but no, they’re calling us.” We had a guy up in the balcony with us with a walkie-talkie to let us know it was time to go on but it wasn’t working so they run downstairs. We throw on what we can and Annie is like, “Let’s do this!” I’m like, “I’m not doing this!” Suddenly we start embodying these two spirits that are normally called “the diva.” I’m gonna fucking do it but also I’m not going on and I’m pissed.

Annie decided to go on and I’m not making her do it alone so I put the dress on and there is this big sliding wooden door and I couldn’t open it. There was supposed to be a guy to help but he’s gone. So in that moment of getting dressed and struggling with the door I realize this is what it is to be a woman against all odds—this difficult woman character we all know Courtney has been labeled that she’s not. She’s not difficult and not a diva and it just sucks to have to go on live and not have any support and be told something different and of course this played into the performance and made what it was.

As we perform the thing, holding up the dress that we hadn’t had the chance to properly tighten truly started to collapse, the set was literally collapsing around us and it was this amazing moment that made the performance better.

Bielski: We had all these tight slapstick elements we were going to sound fucked up on purposed, we had the blood coming out of our mouth, the clothes that rise up and a plant in the audience throwing tomatoes and then in the end the joke was on us because everything else went wrong and it was kind of fun.

Anger: It was one of those things when you’re on stage and the performance ended and I was like, “That was really bad!” as the door closes and Annie yells at me that they can still hear me the mic was still on. 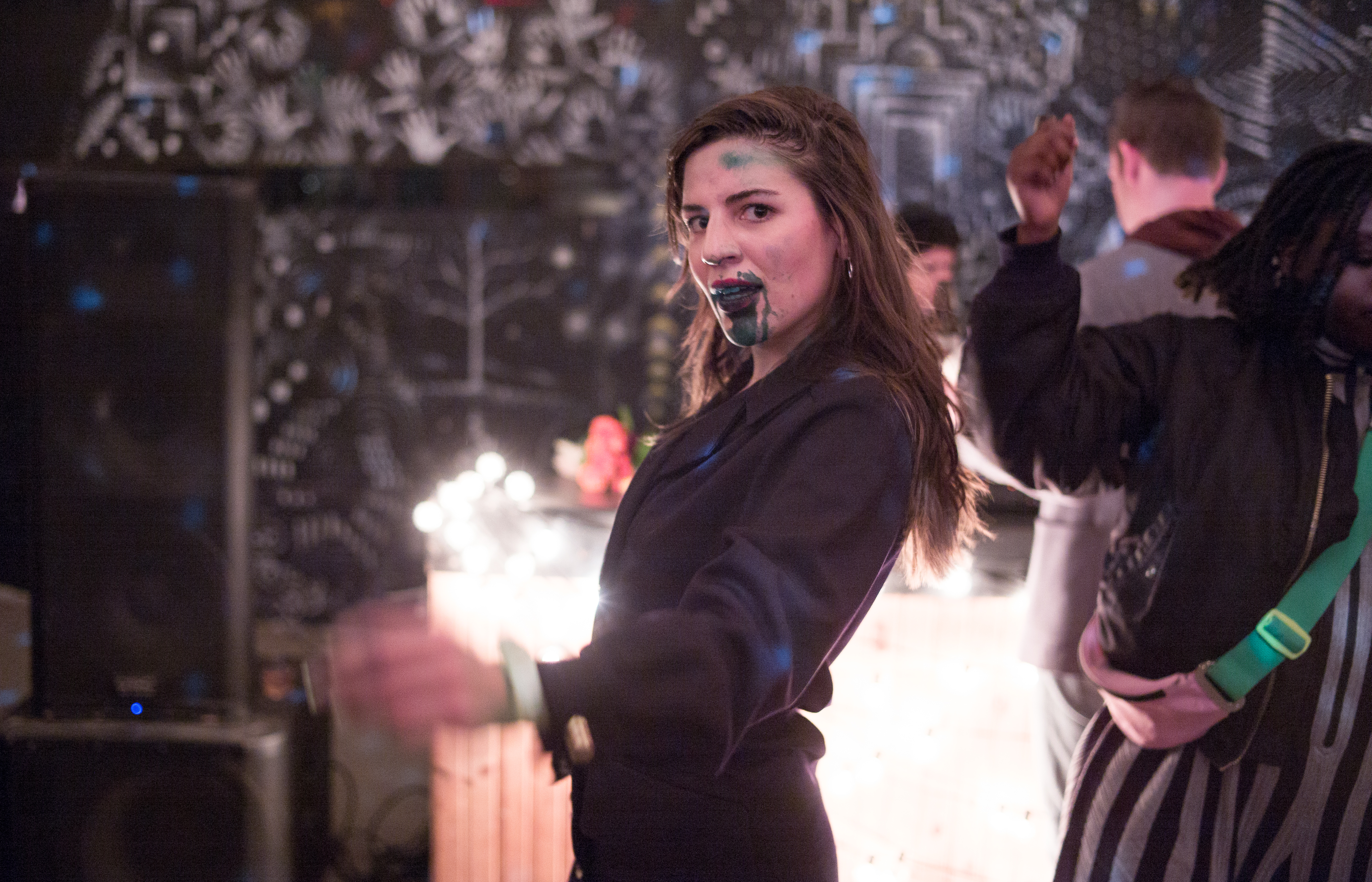 Anger: We had this thing we had tried to plan and it really just fell apart and made it all that much better but maybe less enjoyable. In retrospect I enjoy the performance. I left thinking, “That totally didn’t work out.” And then the feedback was obviously good except for the few people who were like “What was that?”

For me, it felt like first time I understood Courtney in this way that wasn’t just looking in from the outside. Of course, we’ve had performances with Jenny Hval that have gone wrong in the past but this was epic proportions of how wrong it went in just three minutes. It was like putting bad performance in a microwave. It happened so fast. And in the end it wasn’t bad it was better than it was ever conceived to be.

On living and creating in Hudson

Bielski: We met in college. We’re long-lost cousins and Zia was doing her masters in film and I was doing undergrad in painting. It was the last few weeks of school and my family reached out and said, “Hey, we’ve got a relative at school. We ran into each other in the hall and then we had lunch. There was all this crazy synchronicity. We eventually became pen pals. Zia is from Ithaca and I was looking for a way to get out of Chicago and I thought I wanted to go to New York but I didn’t have any money. Zia was like, “Come visit me.”

Anger: I was planning go to New York, too, but I had a job nannying here. I thought I’ll just make this a stopover and then I’ll go to New York.  At a certain point you’re here so you invite your friends. There’s like nobody here and we’re all just making stuff.

Bielski: I remember the first time I visited you six years ago. It felt totally different, more emptied out. There was only one bar we went to, it was so different. There were still weirdos, creative people in pockets. I remember there was one apartment I’d see walking down Warren Street at night and it was so empty but there was one weirdo with a disco ball in their window. So even then there were these weird, performative moments.

Anger: Everyone had their day jobs but what’s cool being up here is everything is in 2 square miles. You finish your day job, you work eight hours and you still have rest of the day. If you work eight hours in the city you spend two hours in transport to go home and are exhausted. Here you are like, “Oh hey, my friend lives five minutes away, we can just get together to do this project.” There is so much more time in the day to do that stuff. With the kind of drain of everyday life and a day job, it is hard to sustain your creativity. I’m still working day jobs and it gets harder to sustain practicing whatever you practice. But here it is so inspiring to be around creatives who are doing the same thing—working really hard and working on our art very hard and supporting each other because there is not much else to do then to support each other.

I never planned to do music videos. When I was at the height of doing music videos I sent Jenny [Hval] an email saying, “Hey, I want to make a music video for you.” So I’d just invite two friends up from the city to make a video. We had everything we needed up here in terms of scenery.  What we all like about Hudson and don’t like is its transient nature. There are a lot of artists here but they are not here full time. They aren’t living anywhere else they are just out touring and performing. It’s my hope to make that entire practice more sustainable. 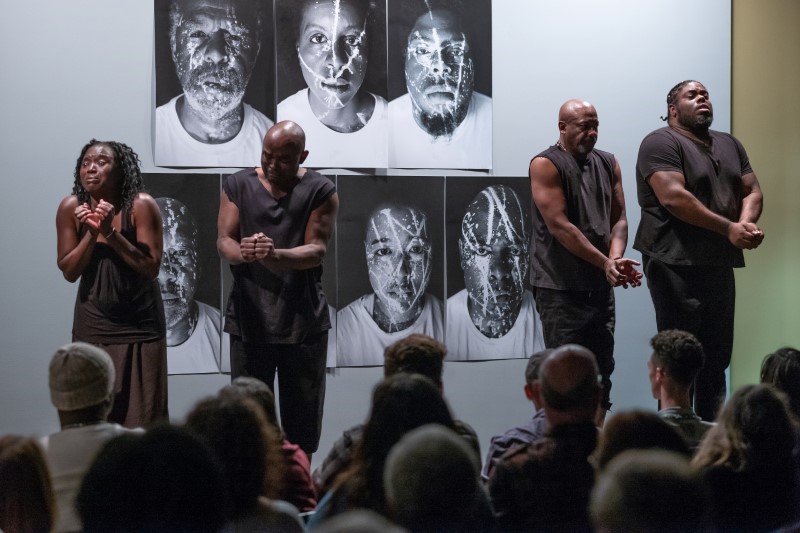