Prince Sprauve leads me through a back door, up an old staircase and into the unrefurbished semi-forgotten nooks and crannies of the Proctors complex in Schenectady and welcomes me to his studio. Everything here feels focused, minimal but arranged to draw the eye to his desk where two curved monitors come together with speakers at their side.

In the hard drive under that desk lives the culmination of everything Sprauve has been working toward since 2013 when he developed the concept for his next film, “Cradle.”

For the last few years, Sprauve has been researching teen pregnancy, meeting with adolescent parents, partnering with interested stakeholders like Ellis Hospital, and writing filming and editing.

Sprauve is more than ready to share the film with the world. But there are a few more steps. “We’re getting this prepped to be Netflix-ready, Amazon-ready; we think its that good,” he says as he brings up the editing suite. “This is going to go viral.”

I’m here to get a sneak peek of the movie ahead of the big roll out this summer. The film will premiere at Proctors in July.

This is Sprauve’s second full-length feature—his first “Fast Life” was a product of work with Schenectady high school students on a music video. Their ideas quickly outgrew the scope of a 5-minute clip and Sprauve decided to turn it into a full-length film. Told By Us Productions was born.

Sprauve says that “Fast Life” gave him the “confidence” to do a feature-length film. “‘Cradle’ taught me how to actually do a film.”

The scenes Sprauve shares are blasts of dramatic confrontation that convey the anxiety, terror, and helplessness felt by young mothers and fathers; the push and pull, guilt and shame they are subjected to by friends and relatives; and the financial realities that destabilize and sometimes destroy families.

Sprauve didn’t seek out professional actors but instead pulled from the community. “When I did “Fast Life” that was organically high school students and maybe 25 adults in that film,” Sprauve says. “The kids weren’t dedicated actors, they didn’t have experience, they were from the streets. To get them to act in certain roles they had to identify with certain things—can you identify with this? Do you know what it looks like, sounds like, feels like?”

Sprauve worked with around 150 actors for the project with a budget of about $400,000. He received support from local organizations interested in tackling teen pregnancy and boosting local arts some of those institutions include the Schenectady Foundation, the Wright Family Foundation, Proctors and Community Loan Fund.

The film feels like it takes place in Schenectady because it was filmed there. Families gave up their homes for shoots. Other familiar locations include Bellevue Women’s Center, Planned Parenthood and various Schenectady City Schools.

Sprauve’s independent mindset and drive were born out of necessity. He worked with four pieces of equipment on “Fastlife.” He recalls looking for help from local filmmakers and picking up tips like using cell phone flashes to light a car at night.

He respects Tyler Perry because he “cut out the middleman by creating his own infrastructure,” and produces independently made blockbusters. Ingenuity and work ethic are what matter to Sprauve.

“You’ll be looking for more equipment all your life. The story is the core of everything,” says Sprauve. “People might tell you it needs to look like this or that. Yeah, it can look like that but the story that’s what’s gonna move people. I don’t care if the movie was shot on an iPhone, if it’s a good story people will watch.”

Sprauve says repeatedly that “Cradle” will “go viral.” It’s like a mantra. He believes the film will reach youth through social media and end up driving down teen pregnancy.

No matter what the impact is, it is clear that the filmmaking process has changed him.

It’s been a journey of self-discovery and reinvention. Sprauve recalls a point in the project where he was frustrated that he couldn’t get folks to come aboard the project. He would regularly have coffee with Bill Ziskin, a performing arts instructor at Schenectady High School, and talk to about his troubles. “We’re these people from totally different backgrounds but we have two things in common: the kids and film.”

“I went to him and he listened to me rant while he was making his coffee with his chocolate chip cookie and stuff. I was waiting for him to respond back and he literally said three words that changed the course of my life. He said, ‘Passion draws people.’ So I thought about it for two days… What does that mean, that all I gotta do is fall in love with what I do and people will follow? He never answered the question but that’s what I came up with.”

So now Sprauve says he is the most excited person on his set. He’s the first person there and the last to leave. “No one outworks me on my set, no one.” 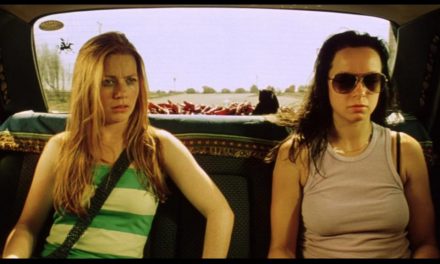