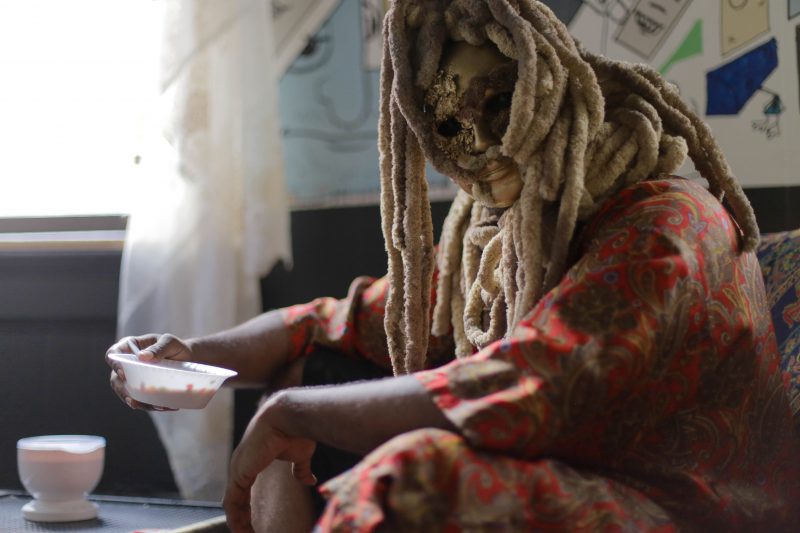 Blank, dark eyes stare from a mask of gold, nestled in a web of yarn dreadlocks. Its gold-painted lips may be melded together, but this face has a voice—one that has the ability to comfort, excite, or push you over the edge.

This mystery figure—the Bro King—is the persona of NXNES (pronounced nuns), a black hole obliterating the universal ego by way of NXNES’ ambient, experimental sounds. To discover the true face behind the music, you’ll have to come out and see him play.

“The Bro King is like my Quasimodo,” said Jo-Jo Rose, the man behind the mask. “His slippers have holes and his robe is always tattered but he thinks he’s the shit. He has a gold face, gold locks—he thinks he’s the guy but he’s got nothing.”

For Rose, the Bro King is represents the elimination of self. The character and the sounds created by NXNES rest over Rose like a musical veil, taking away the artist’s identity to bring focus to the music and the audience it draws.

“The idea was that if I could subtract myself from it, maybe people could get to guessing what it is or just include themselves—a ‘your face here’ kind of thing,” he says. “I like that people will get into it, either like ‘This is awesome’ or ‘Why is this guy doing that, it’s so weird.’ You’ve been affected.”

Rose picked up the bass—his first instrument, which would be followed soon by keys, drum and guitar—at the age of 16. Stuck on the couch after a serious football injury, he was itching for a new outlet where he could channel his energy. He took up a music theory class, snatched a bass and tiny amp on eBay for $80, learned the level one theme song of Super Mario Brothers 2 and was sold.

“I immediately started soliciting myself, like, ‘Yo I play bass!’ and I only have Mario under my belt,” he says, chuckling with a shake of his head.

His first band experience was with Therein—a small metal group out of his hometown of New Bedford, Mass.—filling in between the root notes of another bassist as he continued to explore his instrument.

“It’s totally ridiculous but it’s working really well,” he said of the experience. “Then Metal Blade (Iron Maiden record label) was looking at us. It was way too early for me. As we’re doing that, I start getting back into competition sports. I start swimming. I got super cold feet and I needed to find a way out so I was always swimming. At 16, I passed up being on Metal Blade Records and I think about that all the time. It’s hilarious because I didn’t understand at that time, just being more ambitious that I even am now.”

From there, Rose jumped around in multiple ska, punk and metal projects before going away to college at Howard University in Washington, D.C. from 2004 to 2010. There he explored the rich hip hop and R&B scene and took on a solo venture that would eventually became NXNES, inspired by the diverse musical influences.

“When this was brand new I was just playing acoustic guitar through a loop pedal… dark times. I’m not afraid to be embarrassed though,” he says, laughter bubbling up. “It’s experimental to say the least but it’s R&B and soul.”

By 2011, NXNES was a full project with a five-track EP under its belt called Love and Hunger, performed, recorded and engineered by Rose using only a computer mic and QWERTY keyboard.

“I would just take things like a pen on a mattress and that would be my kick drum. Just a bunch of weird shit. When you have nothing to start with, you dig deeper into it,” he said.

The first of three releases, Love and Hunger represents an explorative jumping off point. The influences of old school R&B and Rose’s playful introduction to sound engineering is at home in the layered synth beats and whispery vocals. It’s light and airy, leaving plenty of negative space for the sound to blossom. Sampled audio excerpts are scattered throughout the EP, such as Maya Angelou’s “Phenomenal Woman” in “Black Woman,” which fades in and out between twinkling echoes of electronic and ambient instrumentals.

“Lyrically, I’m trying to bend a lot into addressing religion within the culture, treatment of women and the social strata. I’m really trying to dig into that,” he said.

The sound of NXNES becomes more structured, filling in any empty spaces, in the 2015 release of KIM. There are still moments of quiet contemplation, but they’re set to catchy beats that teeter on the edge of chillwave in tracks like “These Streets,” balancing out with deep, grooving basslines. Suddenly he switches gears into a track like “Caveman/Slaveman,” which opens as a soulful anthem of intimacy and connectivity that folds into a reflection of society, noting the marginalization of the black community as he repeats “How will they twist the knife next?”

The most recent release, Black in the Darkness, dropped in December 2017 and seems to dig to the heart of NXNES’ creative goal of connecting with each other through music. It’s a hand reaching out to the listener, asking to embrace, to come together, particularly in the midst of struggle and adversity. It’s an album about community and connectedness through various threads of our culture.

Since setting out on his creative journey, Rose has had a difficult time finding a space for NXNES, whose fluid structure and style leave promoters and audience members unsure of how to digest a performance. Particularly those who have become familiar with Rose’s other musical projects over the years.

“I’ve been trying to create music for people to enjoy but I’ve always gotten the response that, ‘it’s so different,” Rose said. “I hate that because it’s such a generic response that’s not saying good or bad, but it’s almost saying bad, or, ‘It makes me uncomfortable.’ My intention was to go all the way that way so you’re either on board or you’re not—but you can’t be indifferent to it.”

The multi-instrumentalist has been playing with punk and alternative rock bands in the Albany area since 2014—first with Blind Mice, then jumping in as bassist and songwriter for Broken Field Runner and spearheading the hip hop and punk-fused band The Black Kennedys—semi-regular guests at Albany DIY gigs from their homebase in New Bedford.

For fans of Rose’s other musical projects NXNES may come from out of left field, but there are familiar elements of his punk and indie work in the solo project and he’s using them to acclimate his alternative rock audience to the world of R&B and soul.

NXNES is also collaborating with local musician Mark O’Brien (Scum Couch, The Death Vacation)—as a duo called NXSCUM—and will be releasing a record together called Wild, Free and Joyless. They’re currently on tour together, with Rose on the bass for The Death Vacation, making their way back from the SXSW festival in Austin, Texas. The artist has been using the opportunity for NXNES to experiment with new audiences as an opener, before rolling right into The Death Vacation set. It has been an opportunity to show the performative range of NXNES, which Albany got a brief taste of before the tour.

“What I love about this area, people are receptive—whether it’s negative or positive. They’ve been affected in some way. ‘Thanks for being here, this thing is definitely on,’” he grins, mimicking a mic test. “I value that. It’s not like I have to have a positive reaction every time, it’s just that I need to at least have you listen. If you have a negative reaction, at least you listened. I can’t have people being like, ‘Nah, I don’t like R&B,’ because that’s what happens at home.”

At the SXSW kickoff show at local DIY venue the Chateau Providence, NXNES was a powerhouse. The set was bellowing. As a finishing move, the soloist placing his guitar against the wall of amps and just let it wail as the deafening reverb swallowed up any memory of silence in the room. At a later gig, the night before leaving for tour, NXNES played an ambient set at the River Street Pub in Troy on a Thursday, elongating his songs into slow and soulful jams with Craig Dutra, who joined him on the keyboard. In just two performances, the artist expressed his ability to read the room—deciding to either adhere to the vibe or shake it up. At the end of the day, it’s about engagement.

When he returns from tour in late March, Rose will wrap up recording sessions for a new NXNES album, Everything Costs A Little Bit, with Dutra in Albany. Dutra, of the local DIY veteran band Hospital Corners, has recorded several local bands out of his home studio—most recently, Jouska’s From Elson to Emmett EP.

“I’m used to recording everything myself and I do it very quickly. It takes me about a week and a half to get everything recorded, then a couple more weeks to get it mixed,” Rose said. In Dutra, he’s found a kindred spirit.

“It’s so much better. The stress is off me—I’ve never given this stuff up to someone and now it’s in trusted hands. He’s got a good ear and we’re finding out that we’re sort of kindred in terms of how to create sounds and music together,” he said. “We’ve gone from where all of my demos are smooth and chill. Now we’ve gone a little uptempo and really dug in.”

The album, he says, is largely influenced by his love for ‘80s R&B like Loose Ends and The S.O.S Band, his indie rock experience, and his ability to create experimental, atmospheric sounds in the studio.

“I am thoroughly obsessed with D’Angelo’s second album, Voodoo. He’s got a lot of vocals on that so I’m always putting tons of vocals on my stuff that are layered. He has this thing where there’s always people talking, it’s like you’re at a party. You just feel like a part of it,” Rose explains. “That’s what I’m trying to do right now.”

Playing off of his 11 prepared demo tracks, the pair have been tweaking the sounds and teaching the songs to several musicians to record takes and scattered studio conversations to achieve a sense of atmosphere and authenticity. He and Dutra have spent five to seven hours a day in the studio since January, just trying to see how far out of the box NXNES can reach.

“We spend hours but it’s because we get lost in it,” he said. “A song can be good—and let that shine—but [we want to] create stuff around it so that the crowd can be like ‘what’s going on?’

With the completed Everything Costs A Little Bit, NXNES will hit the road again. This time he’ll take on the Los Angeles music scene, performing amorphous R&B for an entirely different crowd. Who knows, this album might just be the one that puts the Bro King onstage—somewhere the character has never actually stood before, instead coyly represented by the artist in decorative flecks of gold.

This upcoming project speaks to the motivations behind creating this mysterious, tattered and gilded persona, Rose explains. “With this album, it’s like, you’re losing a little bit every day.” 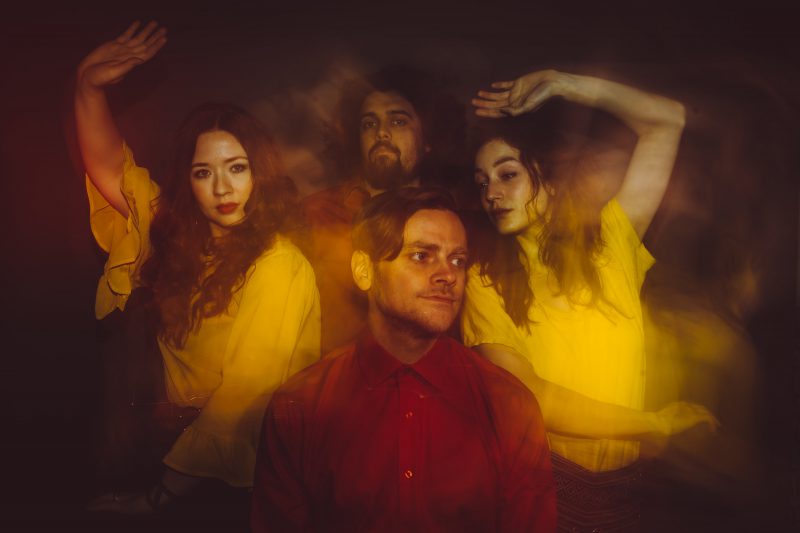 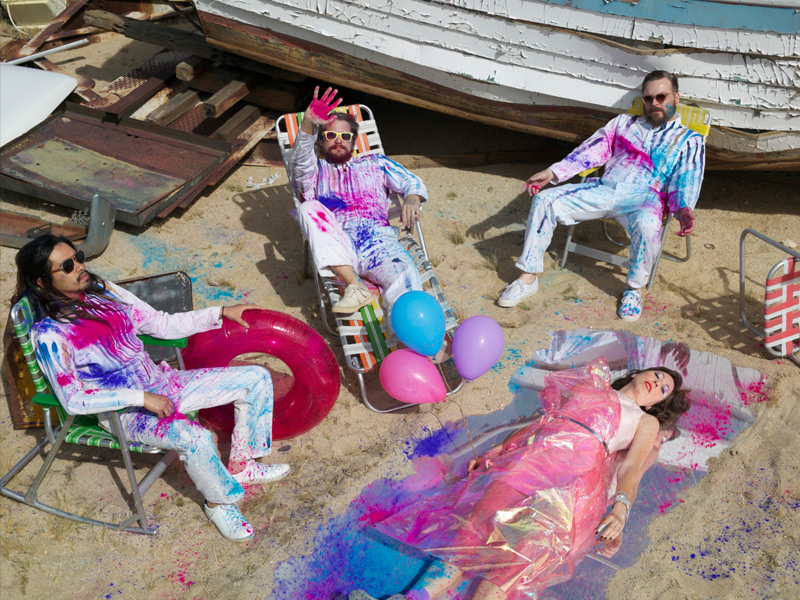