Rachelle Smith-Stallman has nurtured her lifelong passion for dance in myriad ways, from her exploration during the peak of the Postmodern dance era to her work as a board-certified dance movement therapist. Currently, she is the instructor of a dance program for those living with Parkinson’s Disease. She also has a résumé of voiceover and on-camera acting work, loves to take photographs and has an Etsy shop called Eardoodles for her unique jewelry creations. And she loves to laugh.

Tell me your journey as an artist — wherever you want to start.

OK, my journey! Well, I want to start with dance, of course. Dance is really my No. 1 passion.

I started ballet at 5… I had some friends who were gymnasts in elementary school, so I learned how to do cartwheels and roundoffs. I was always very body-oriented. Growing up in Texas, the thing is drill teams. I was on the drill team, marching in the field in the middle of football games, stuff like that. Even marched at a Cowboys game.

So that was really dance as well. Then I started taking dance in college, and that’s when I truly fell in love with moving and improvisation. I went to the University of New Mexico; they were just starting their dance program, and they brought in all these experimental people to work with, (such as) Pilobolus, right when they started. Just being exposed to all the post-modern dancers — that just really opened my eyes. Anna Halprin (is someone) I adored during that time, kind of followed her around everywhere… she kind of started me out in being interested in dance therapy. She’s an amazing woman (who) just turned 100.

One of the things that really sold me on her… I was in a big gym with about 50 people, and she sat on a ladder at the very top. She told us to pick an animal we could be — a bird, a cat, a made-up animal… she gave us these choices. We were animals for literally three hours. It was interesting to see how the same kinds of animals went to the same kinds of animals, and then we formed a family. This was all organic. And then we had our little territories, and how did we interact with other people? It was just really interesting because the first reaction was anger at another group, but then you became friendly with your neighbors.

I just loved it. I’m talking about the ‘70s here, so this is a long time ago! But, you know, big impression on me and my life and my dance world. I ended up going to dance therapy school.

Where did you do that?

I went to Hunter College in New York City.

While I was in dance therapy school and I was waiting on tables, people always commented on my voice. They always said, “Your voice is so unusual, you should really do something with your voice.” But I was so focused on dance therapy, I never really did anything with my voice.

And then, after I was married, my husband and I were just traveling, I think we were maybe in Montreal. I was in some shop, and some guy turned around to me and said “Listen, I work in radio, and you really have to do something with your voice.” So I thought… I have heard this so much, I’d better do something.

That was sort of the turning point.

That was it. So I went back (to Albany)… I made a demo, a little tape demo, sent it out to a bunch of places, actually spoke to people at Warner Bros. who were extraordinarily nice to me; they basically wanted me to move to California, but I just couldn’t do that.

I can do all kinds of different voices. Now, the older I’ve gotten, the lower my voice has gotten. I don’t really sound like I did (before), but it puts me in a different category. If I audition for something, I can be more middle-aged or senior. And I can always still do baby voices and little kids’ voices.

It was really fun for me to do voiceovers. I loved it, I loved going to studios and all that. In the past some years, that’s all changed because people do that online through different agencies which I had been a part of. I did get work… but you were up against so many people worldwide, it’s very difficult and then it gets really frustrating. And also, it’s just not the same, because you’re in your little studio. I have a little voiceover studio in the attic that my husband made for me.

After all those years that I did (agency work) online, I decided I was just going to give that up for a while. And even without me being a part of them, I still do get auditions through them.

Were you dancing all throughout that whole time as well?

I’ve always danced; I’ve always worked in dance therapy somehow. Worked with all kinds of populations. I worked with a boy with autism; there was an article in the Times Union about that. I worked at St. Anne’s with the teenage girls; that was amazing, I loved that. But then of course they (lost) funds for me. I was one of the first to get cut, which is quite often in the arts, unfortunately. I mean, look at St. Rose now, can you believe it?

It’s heartbreaking. I mean, come on. What does our society need most? We need artists.

When you’ve danced professionally, for the most part it’s been dance therapy work?

I was lucky enough to train with the Mark Morris Group in Brooklyn. They have an amazing Dance for Parkinson’s program… when I teach dance, it’s not about therapy. You put that aside. It is about aesthetics and expression. Yes, it’s therapeutic, but it’s really different than dance therapy that I’ve done in the past. This is sort of a new road for me, in a way, which has been incredible and wonderful, full of fantastic people. Just a beautiful supportive community.

There were people close to me that had Parkinson’s. I was hearing about a little too much. So I thought, well, I’m just going to volunteer a class. I found on Facebook something called Hope Soars, which is a local Parkinson’s community fundraising/research group that’s connected to Albany Med. I contacted this man there, Mark Burek, who’s amazing. He put the word out and, sure enough, I did about five free classes and the next thing I knew I was asked if I wanted to go to Brooklyn to train with Mark Morris… my first training was at Julliard, and I was in heaven.

One of the fun things that I did for a few years was that I was the dancer for the Disposable Rocket Band.

OK… I have no idea what that is.

A local musician, Mat Kane, played the electric ukulele or something? Some kind of teeny electric mandolin… it was all crazy, and we dressed up. He would wear this incredible helmet with stars and lightning, and I would dress like a sparkly-roboty-whatever… it was all crazy. We did some performances in New York City, and we got on The Chris Gethard Show.

One of my most fun dances was when I danced in popcorn… I did it for Troy Night Out, I did it at Proctors and I did it at Living Walls years ago. That’s what kind of started me out.

How much popcorn are we talking about?

A lot of popcorn! I actually collected popcorn, both from the Spectrum and the Madison movie theaters for two weeks every day, at the end of the night — hoping that the squirrels wouldn’t get it from my screened-in porch. And then I filled up a space with popcorn… it went up to maybe above my ankles, and I slithered in it and I squished my toes in it and I just had a lot of fun in it!

You’ve taken your Dance Beyond Parkinson’s program online now, because of the pandemic. Talk to me about how the pandemic has impacted you as an artist.

What can I say… I think it’s really tough, because what I do is very social. We held hands in a circle; when you’re dancing, you do improv, so you might make shapes and have contact with others. That has changed, and I’ve kind of learned how to teach differently. I think that the plusses for the people I work with (are) that they don’t have to travel or go outside, and I’m right there, and it’s so nice to see everybody online. It’s different, but it’s still good.

That (program) is totally my main thing… and it allows me to create so much. I create different movements for every dance that I do, to every piece of music. And then fun thing for me is to create playlists. I’ve never repeated a playlist, as long as I’ve done this. I love listening to music, and I love switching it all up… it’s so great, because I discover so much.

My last question: Why do you see the arts as being valuable to society? Not everybody sees that.

That’s a huge question. Art is life, and art is within everyone… I don’t know what’s wrong with these people that don’t get how important art is!

If I were one of those people, how might you convince me to reconsider that?

I would say, look at museums. Look at Michelangelo, look at the greats. Look at Leonardo da Vinci. Look at Picasso. Look at the dancers… that must stir something in you.

And if it doesn’t, what does? 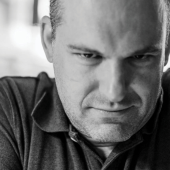